For those who missed this morning's BBC Breakfast paper reviews with Nazir Afzal, former chief prosecutor here in the North West, here are some extracts from his two discussion with Jon Kay and Naga Munchetty.

The contributions of the BBC presenters here are well worth noting for the way they steered the conversation in particular directions.

Note the general disdain for Donald Trump, the admiration for Justin Trudeau, Naga's promotion of a pro-migrant story and the careful handling of the latest findings from Ofsted: 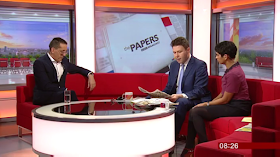 From the first paper review:


Jon Kay: Let's move on to the Daily Telegraph. It's just one of many papers, of course, referring to Donald Trump, who's been in the papers and news every day this week. What's he said now?

Nazir Afzal: Well, he's never short of a comment or two. Today...or yesterday, he talked about his view...and he seem to keep focusing on British Muslims a lot given that he's running for the American presidency...he's talked about British Muslims apparently, according to him, more likely to be fighting for the Islamic State, so-called Islamic State, rather than the British Army, basing it on some figures he's seen somewhere. And most of the newspapers have taken him to task over that, the reality being that's not true, and he doesn't take account of the thousands of Muslims that are fighting against the Islamic State and also the fact that 99% of the victims of so-called Islamic State are Muslims themselves. And I think there's a wider point...and I've been trying to make this all week...is that he doesn't take account of the Muslims in the police service, the Muslims in the prosecution service, the Muslims in public service. You know, we make a...Muslims make a tremendous contribution to British society and that's something he seems to neglect and ignore. And, you know, I might have been a chief crime prosecutor, I might be...I'm a pro-chancellor of a university, you know, I chair various charities, but there are too many people, unfortunately, who just simply want to identify me by my faith. And not only is that sad, it's very dangerous.

Jon Kay: And you think it's more likely that would be the case if these kind of comments from Donald Trump continue to get this kind of coverage?

Nazir Afzal: It feeds this feeling that Muslims are different and Muslims are not contributing, when I know for a fact that's not true.

Nazir Afzal: It's a...it really puts us to shame, doesn't it? The Canadian prime minister is meeting, himself, the new Syrian refugees that have come. And people tend to forget that Syrian refugees are leaving everything behind. They are running away from these murderers of the so-called Islamic State and we have an absolute responsibility to look after refugees, as we did in the '30s when members of the Jewish faith were leaving...and, you know, running away from the Nazis. So the fact that Trudeau himself is meeting them as they arrive is a statement and one we should be...well, one we should be shamed by.

Naga Munchetty: Another statement that is quite interesting...I don't know if you saw the Banksy photo of Steve Jobs, former Apple CEO and son of a Syrian migrant?

Naga Munchetty: And you spoke about, you know, the words from the likes of Donald Trump and what it does for Muslims. There are other voices though that are coming out and that must be quite heartening as well? You know, actually not everyone has a negative point of view and people are willing to put forward a positive point of view.

Nazir Afzal: Absolutely. It has to be said that this country's the best country for Muslims in the world in my view, and the view of many, many Muslims. And the fact that Steve Jobs was, you know, the son of a Syrian migrant and made an enormous contribution - and he did build the biggest corporation in the world - says a good deal about what we should be focusing on which is 'contribution' not 'cost'.

Googling around this morning reveals that the BBC played no small part in first promoting the positive pro-(Muslim)-immigration Steve Jobs angle to the Syrian refugees/immigration story.

Less well known is the fact that while Steve Jobs was born in California he was actually adopted, and his biological father was a political migrant from the Syrian city of Homs, now devastated by the civil war in Syria.

On Twitter this fact has now gone viral, starting via a tweet by David Galbraith, and further exposed by the BBC World Service's Outside Source programme. It remains a powerful statement, especially following the ISIS atrocities in Syria, Iraq, Egypt and now mainland Europe. 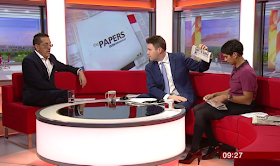 Back to BBC Breakfast though, and from the second paper review:


Naga Munchetty: OK. Erm, "Islamic schools face prosecution after the discovery of anti-gay books and rats". You're going to have to explain what's happening.

Nazir Afzal: OK, yes. Ofsted has, quite rightly, they inspect these independent schools and supplementary schools as well as the schools that we would normally associate with them. And they've identified a number of schools - one in particular that's referred to which has anti-gay propaganda and materials available to children.

Nazir Afzal: Absolutely, and as I understand it that school has now actually been closed down and Ofsted have used their powers. And again my point here here is it's also...some of...one of the other newspapers talks about Sunday schools may be inspected as well under the new regime, and I'm very much in favour of anywhere that's responsible for safeguarding our children being subject to inspection. That's how we raised standards. Anywhere that's looking after our children should ensure they don't have access to materials like this, that they're given a proper curriculum and they're taught the kind of things we would want them to be taught.