This is about the reporting of the German Bundestag’s decision to “denounce” / “label” / Deem” “designate”/ “condemn” / “declare” the BDS movement antisemitic. (Variety of terms used) It’s a non-binding resolution, so it’s significance is largely symbolic.

Coincidentally, Douglas Murray has been giving a series of talks in Israel. He said this:

“I went to Berlin last month and Budapest the month before. In which of these cities did the Jewish leaders [recently] say don’t wear public signs of Jewishness?”

"The answer is Berlin"

"In a move welcomed by Israel, a majority of lawmakers in the Bundestag voted in favor of a motion to label the international Boycott, Divestment, Sanctions (BDS) movement as an entity that uses anti-Semitic tactics to fulfill its political goals.

“The argumentation patterns and methods used by the BDS movement are anti-Semitic,” read the motion submitted by Chancellor Angela Merkel’s conservatives, their Social Democrat coalition partners as well as the Greens and Free Democrats.

Securing Israel’s survival has been a priority for Germany since the defeat of the Nazi dictatorship that committed the Holocaust, in which an estimated six million Jews were murdered. 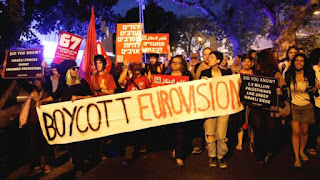 “Lawmakers in the Bundestag said the Boycott, Divestment and Sanctions (BDS) group uses anti-Semitic methods to promote its political goals.

The BDS movement described the decision as "a betrayal of international law".
It comes after the group called for artists to boycott the Eurovision Song Contest held in Tel Aviv this week.

In Friday's resolution vote, which took place on the eve of the show's final, Germany's lower house said the actions of the BDS were reminiscent of the "terrifying" Nazi campaign against Jewish people under Adolf Hitler.

"The 'don't buy' stickers of the BDS movement on Israeli products [could be associated] with the Nazi call 'don't buy from Jews', and other corresponding graffiti on facades and shop windows," the non-binding resolution said.”

(The BBC's report gives equal prominence to the pro-BDS side, including ‘relevant’ bullet-pointed links: for example:


Hmm. The Beeb is trying to tell us something.

Apropos of stuff that conceals an 'unintended' story within the intended one, Nada El-Hammoud has written a review of the film “One day in Gaza” for Middle East Monitor, in which she praises the very things in the film that I thought most revealed its bias against Israel. For that reason, I found the review unintentionally hilarious.

As well as making I laugh, her enthusiasm for the film was a massive giveaway. It couldn’t have been much clearer where the production’s sympathies lay.  All those Olly Lambert fans out there who claim it was even-handed wouldn’t be too pleased if they stumbled upon that review.

This whole business of BDS is odd. Here’s another piece by a Canadian contributor to MEMO, all about BDS.

It’s written in a rather elaborate style, and in the manner of faux objectivity, but it can’t help revealing that the author is just as biased as the rest of the BDS brigade.

“The famous twentieth century German philosopher Hans-Georg Gadamer taught us that there are two kinds of dialogue. First, there is what he calls an “authentic” dialogue, where participants engage in an honest and open discussion over a subject matter, losing their own desires and interests in their collective effort to understand the subject matter itself by delving into its many dimensions, exploring its depths and illuminating the implications of our understanding of the subject matter.

Then there is what he calls an “inauthentic” dialogue, where participants are not interested in following the subject matter itself; rather, they are simply interested in winning the argument so as to serve their own desires and interests.”

Or, more succinctly, there’s 'honest and straightforward debate', and there’s 'agenda-driven' polemic, disguised as the former.

The big reveal comes near the end of the piece, as he addresses the issue of antisemitism. His concern has a rather unconvincing type of sincerity about it. (or is that just me?)

“Anti-Semitism is real, alive, very dangerous still and even growing and spreading. Is it possible that some of the people who support BDS in Canada (and anywhere else), especially online, hold anti-Semitic views? Of course it is possible.”

We can and should have more meaningful conversations over anti-Semitism as well as the nature of the Palestinian resistance against Israel……….which is rooted in the displacement and suffering of Palestinians at the hands of the Israeli state.

That is pure agenda-driven falsification of the actualité, and a prime example of what he calls “inauthentic dialogue” Antisemitic, much? I'll fix it for you, as they say on the interweb.

“The nature of the Palestinian resistance against Israel is rooted in antisemitism". That's better.

The 1948 war, fuelled by Arab rejectionism and rooted in Koranic antisemitism is what caused the Palestinian Arabs to flee. That, combined with their co-religionists' refusal to accept them as citizens of the countries to which they fled, was the origin of their displacement.