The BBC v the media

I have to write something about “The BBC v the media.” 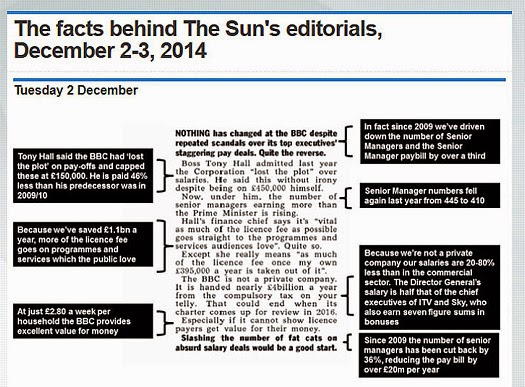 The BBC has hit back at critics who have questioned executive salaries, asking whether licence payers are actually getting good value for money.
The BBC has issued, via Twitter, a rebuttal.
The Telegraph’s Anita Singh doesn’t seem convinced. She cites a number of figures which make the BBC’s protestations of prudence seem slightly disingenuous.

Danny Cohen has begged journalists to be “less of the critical friend and a bit more of the friend” to the corporation.

At the moment it’s not only the profligate squandering of resources that we criticise, but the inherent left-wing bias, the lack of imagination and lack of variety, the political correctness, the ubiquity of certain ‘personalities’ who appear time and time again, on everything, till everyone’s sick of the sight of them.

Cohen stressed the importance of the BBC, its outstanding reputation and the fact that it delivers education and deep joy and stimulation to 97 % of the population every month.

Maybe it did, once.

There has been criticism of the large amount of repeats scheduled for the Christmas period. That does seem to be a pretty poor state of affairs, what with all those over-paid managers and high-salaried TV talent, you’d think they could cobble together some original material to entertain us over the dreary Christmas hols.
Posted by sue at 18:00