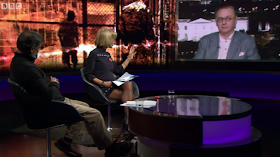 He spent a third of his life in a cell in Guantanamo Bay, now Shaker Aamer is released home to Britain without charge. What purpose has Guantanamo served and what do its practices say about our governments?

The main focus on Newsnight's coverage was a discussion between Moazzam Begg (inevitably)in the studio and former US government advisor David Rivkin on a video link - i.e. a verbal brawl between an Islamist and a strong supporter of Guantanamo Bay.

That might also have been fair enough if she'd have pursued Moazzam Begg too. She did no such thing though. He was asked a mere two questions and not challenged once. And his questions weren't even tough ones (unlike those put to David Rivkin):


Moazzam Begg, you've been in touch with Shaker Aamer's family today. What kind of response have they had?

I want to ask Moazzam Begg, when you got home and now looking at Shaker's position within society, do you feel like an innocent man or do you...you've heard this opinion (with a wave of her arm towards Mr Rivkin) from an advocate of Guantanamo Bay, do you feel that you are vindicated?

Emily seemed to be letting her anger at Mr Rivkin's attacks on Shaker Aamer and his strong defence of Guantanamo get the better of her. After Mr Rivkin butted in to give himself the last word, her displeasure was something to behold - as the following screenshots (second by second) might suggest: 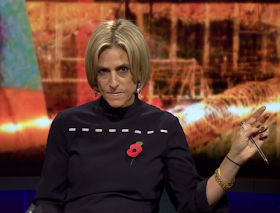 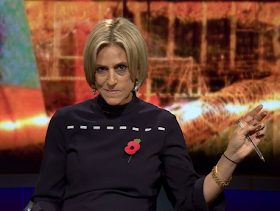 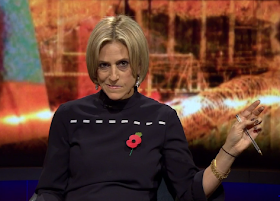