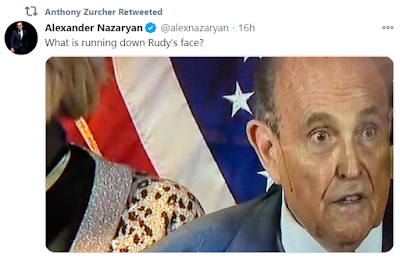 The comic stylings of the BBC's North America editor-turned-stand-up comedian, Jon Sopel, continue to tickle the funny bones of his admirers.

He was soaking up the applause last night for his gag on the News at Ten about Rudy Giuliani "clearly having a bad hair dye", even though he'd obviously nicked the rib-tickler from his similarly impartial colleague Nick Bryant.

(Jon is, famously, no stranger to hair dye himself).

Anthony Zurcher is another one, favouring the dry Jack Dee-style one-liner. (He even has his own stage name, The Zurch.) He's one of his latest zingers: 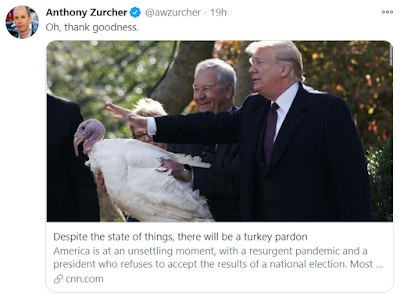 Boss Danahar himself leads from the top, though his punch-lines are more, er, subtle, eg:

President Trump’s personal lawyer Rudy Giuliani is again using a press conference make a number of unsubstantiated claims  of coordinated, widespread fraud in the US Election. In one positive development for his team it appears not to be outside a gardening center.

Mr Danahar certainly wasn't impressed by Rudy Giuliani's performance yesterday, also tweeting "Rudy Giuliani's press conference today on ‘voter fraud’ was one of the wildest, most unsubstantiated diatribes I’ve ever listened to and I say that as someone who has sat in a room with Col Gaddafi for three hours."

I'm presuming that Mr Giuliani kept his wind to himself though.

Meanwhile, this morning's Today programme allowed Justin Webb to join in. He was talking to the Guardian's beauty columnist Sally Hughes (Q: Why doesn't the BBC have a beauty correspondent, or is that Jon Sopel?) and dealing with the substance of the former mayor of New York's press conference - the hair dye tricking down his face, of course. Sally was telling Justin that she though it was "a very temporary form of hair dye, so either a wash-in-wash-out sort of a dye" or "a spray-on kind of root touch-up product" and Justin replied:

So he hadn't done it properly? Because you ought to be able to. I mean, with proper hair dye you should be able to go into a hot room, shouldn't you, and fulminate about Venezuela?

Sally from the Guardian chuckled and Mishal Husain (not a bundle of laughs herself) guffawed. It's the way he tells 'em!

I wonder if they'll ever have such fun about any member of the Biden administration, even once?