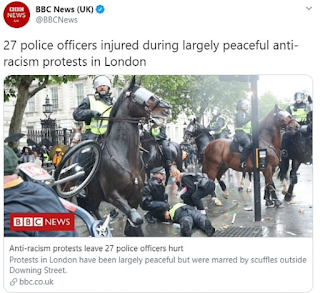 The Times reports that the Defund the BBC campaign has already raised £60,000 via crowdfunding, and now wants to escalate its lobbying efforts. According to the woman who runs the campaign's daily activities, Rebecca Ryan, it was the BBC's coverage of Black Lives Matter - in particular that notorious headline on the BBC News website that read, “27 police officers injured during largely peaceful anti-racism protests” - which sparked them into activity. (It was indeed. I remember its launch on Twitter). Ms Ryan continued:

For the last four years the Brexiteers have been portrayed by the BBC as being thick, racist and old. It is difficult to explain to people who didn’t support Brexit how it actually feels to be forced to pay for something on fear of imprisonment only to be repeatedly portrayed in that way. It’s a deep, deep injustice.