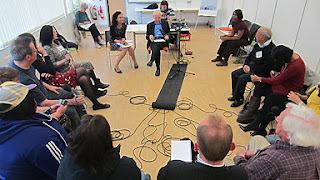 Some initial impressions of this morning's Today programme, with John Humphrys and Justin Webb...

I'm listening to Today all the way through this morning. They are leading with the harsh criticism of Michael Gove by a "moderate" teaching union (the word used by BBC reporter Luke Walton), just as the BBC News website is leading with the story. Is this evidence of bias? Let's just check the ITV News website. No, it's their second story, so they think it's a big deal too. That said, the Sky News website is paying no attention to the story and the Daily Mail doesn't think it's even worth reporting either. The Daily Telegraph has a new online report about it, but you won't find it on its home page or its news page. (I only found it through Google News). Even the Guardian (no fan of Michael Gove) doesn't rate the story. So, it's pretty much only the BBC and ITV who think that a teaching union calling Mr Gove "fanatical" is the main story of the morning. (And is ITV just copying the BBC?) Now, of course, a head teachers' union saying that might well actually be an important story, but the most important news story in the world? Surely not. Is this evidence of BBC pro-union/anti-Gove bias?

Ah, here's the BBC's David Loyn discussing women's rights in Afghanistan. Fundamentalist Muslims in the country are continuing to make strenuous efforts to take away their already restricted legal protections. David Loyn takes me by surprise, ringing a small alarm bell in the process, by characterising these religiously-motivated fundamentalists simply as "right-wing". Is that an adequate word to describe them? Is it a biased way to label them, tarring all right-wingers in the process? Anti-right bias?

Dr Leena Hoffmann of Chatham House is the designated expert to discuss the Nigerian government's military assault on the vicious Boko Haram "militants" (i.e. Islamically-inspired terrorists). Time after time on the BBC (or so it seems to me), you hear BBC-approved experts backing what seems to be held as a truism by many at the corporation that military solutions are never effective in any conflict. Dr Hoffmann advanced that very point of view here. Pro-appeasement bias?

Also in the early stages of today's edition, we got a taster for the programme's big event - a discussion hosted by John Humphrys with a focus group in Slough on the effects of the recession and the cuts. One of those focus group members was allowed to give her own address to the nation in advance of the discussion. Did the choice of a public sector headteacher from a non-selective comprehensive in a county crammed with selective schools (and who approvingly name-dropped a couple of Labour politicians) indicate bias on the programme's part? Why not choose one of the entrepreneurs? Why choose the most obviously politically-left-wing member of the focus group to represent the voice of Slough? Pro-left bias?

"Pity the poor old European Union", said Justin. Cue a discussion with French pro-EU left-winger Agnès Poirier of the Guardian (why is it so often her on the BBC?) and Stefanie Bolzen of Die Welt. Pro-EU bias?

Peter Bradshaw of The Guardian  is on after the paper review to discuss crime in the south of France and films. Then it's Platitude Of Thought For The Day with Rev. Rob Marshall on head teachers needing to build ships of spirituality and Pope Francis releasing two doves, which is nice.

Alexander Litvinenko? Call in Annie Machon as the next designated expert. Who she? A former British spy, David Shayler's former significant other (not mentioned), a whistle-blower who went on the run from British intelligence, a harsh critic of Western intelligence agencies (including our own) and Western foreign policy, a "truther" who believes the US was behind 9/11 and who advances the debunked 'dancing Israelis' myth, and, following a pattern, who also claimed that Israel bombed its own embassy in London in 1994. You can read more about this bizarre choice of expert here. Unsurprisingly, she spent much of the interview bashing Western intelligence agencies. (At least she held herself back from blaming Mossad here). Anti-Western bias?

The second hour began with a discussion about how we can stop children "in the care of the state" from being abused, interviewing a care home manager. A crucial issue, and one worthy of its prime spot. Today, however, somehow managed to find someone who strongly favours the state's involvement in care and who complained about privatisation and competition. Anti-private sector bias?

Kate Garraway, a TV presenter, and feminist Rosamund Urwin of the Evening Standard, then debated whether women should have children earlier, before a piece on clutter and hoarding (and their dangers).

The discussion with the "representative" recession focus group in Slough took up much of the closing half hour We heard from a sustainable transport businessman who was worried about cuts; a woman, now unemployed, who used  to work for a translation company; a 23-year old woman who's never had a full-time job; that head teacher from earlier, complaining about scrapping of EMA and criticising the effects of "austerity"; a mother with two apprentice sons who can't get the right jobs; and a 90-year old lady who says older people are suffering from energy cuts. So far, so depressing. Then came a self-employed man who, after being on the breadline for years, started his own website company and is doing well, thus providing the first ray of hope. It didn't last long as John Humphrys incited him to complain about the banks, which he duly did. An ME sufferer, who has veered between being on incapacity, feeling penalised against and getting a "pittance", and being self-employed (which he is again now), provided a second, fainter glimmer of hope. "Pretty much all of you" have been hit by the recession, some "badly", summarised John H, but the entrepreneurs are more hopeful. The 90-year old lady complained about "immoral banks", but the self-employed website company owner again struck a less pessimistic note. John H gave head teacher Mary "the final word", and she worried about manufacturing. "Some mixed views", he said in conclusion. Yes, true, but overwhelmingly negative ones.

The thing that struck me about this discussion, interesting as it was to hear the experiences of a range of people, is that the focus group didn't strike me as being particularly representative at all: A headteacher, an elderly person, three self-employed businessmen, two unemployed women and a mother with children who can't find decent jobs. What about that large chunk of society (or which I'm part) which is employed in the private sector (without being an employer)? Aren't those people, by far, the largest chunk of the post-school, pre-retirement population of the UK? Why didn't we hear from such people? Why didn't we hear from even one such person? How can the panel have been representative without such a person being heard from? 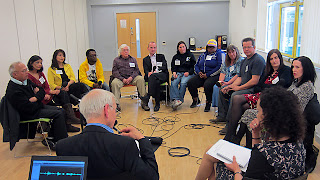 Part of the answer might be - if this accompanying photo (on the Today website) is this particular focus group - that not all the people in the focus group were heard from. Maybe people like me were there, just their contributions weren't included in this package. If that's the case, why ever not?

After the final paper review, the programme ignored the fraught racial/religious aspects of the Oxford Grooming case and discussed the impact of such appalling cases - including the murder of Tia Sharp - on jurors. What impact do these kinds of disturbing cases have on a juror's mental health? Peter Gibson, volunteer Director at the Central London Samaritans branch, and Dr Noelle Robertson, clinical psychologist at the University of Leicester, discussed the issue - and it's well worth hearing, as it's an important issue. No bias detected.

Given that I was looking for bias, I certainly found plenty of it, didn't I? The full programme is now available to listen to. Please give it a listen and see whether you find the same bias too.
Posted by Craig at 11:37