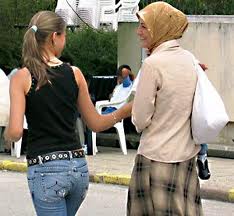 Following on from Sue's Whitewashing Sex Gangs post, the closing section of Radio 4's Sunday dealt (as Sue pointed out) with the same highly controversial issue of child grooming by Muslim gangs in the wake of the Oxford abuse trial, where several men with backgrounds in several Muslim countries (not just Pakistan) used and abused a number of under-aged white girls in the most degrading and cruel ways imaginable.

For a programme that has exhaustively pursued the Roman Catholic Church over the particular issue of clerical child abuse in recent years, this is a subject the programme needed to tackle. There is a perception among some viewers and listeners that the BBC treads far too gingerly around this issue. Sunday has not exactly ignored it over the past few years, though it had dealt with the issue far less frequently than it has dealt with the issue of abuse by Catholics. You can read the detailed evidence for this contention here - a complete survey of 93 editions of the programme in 2011 and 2012 which found that the issue of Muslim paedophile gangs, child abuse by imams and within Islamic institutions and other such matters was discussed on just three editions (3.2%), as compared to the 26 editions (28%) featuring discussion of Catholic clerical abuse.

Many people believe there's a link between the teachings of Islam and this specific form of child abuse against non-Muslim girls, however hotly denied this may be by the police or the Children's Commission.

As Sue said, this edition of Sunday closed with a debate between Sheikh Ibrahim Mogra of the Muslim Council of Britain and Dr. Taj Hargey, imam of the Oxford Islamic Congregation. Like Sue, I found Dr. Hargey's contribution magnificent -  "Good man!" was my (somewhat old-fashioned) exclamation on hearing him - and Sheikh Mogra's disgraceful attempts to undo the damage turned out to be a complete disaster (for him). Dr. Hargey won, all hands down. Sheikh Mogra sounded like a creep.

This was partly down to Edward Stourton's evident surprise at and refusal to accept Sheikh Mogra's feeble and blindingly obvious attempts to slip and slide in order to evade the point of Dr. Hargey's comments. "Good man, Ed!", I thought (stroking my whiskers, and sipping on my breakfast pint of port).

Here is a transcription of that discussion, I hope you find it as interesting as I do.

Ed: Dr. Hargey, in what sense do you think the religious background of men in a case like this predisposes them to commit this kind of crime?

Dr. Hargey: Well, it's the mood music from the mosques and the madrassas, the drip-drip effect over many decades that says that women of another culture and another race, especially British women who are immodestly dressed and who are, therefore, impure and immoral, and they are fair game. They don't say that directly, but I think that they have juxtaposed that Muslim women wear the hijab, the niqab, the headscarf and the face mask and, of course, our women are better; other women, by an unspoken subtext, not so good. And I think this is what we need to address. I think we cannot bury our heads in the sand and say this is not an issue that effects the Muslim community. It does. Most of the perpetrators - whether Rochdale, Telford, or Derby, or wherever - are Muslim men and whether they are Pakistani, it doesn't really matter. What is important is that they are Muslim. So where do they get this idea about women? Where does this misogyny about women and patriarchy come from?

Ed: Your answer to that question is very clear. It comes from the mosques?

Dr. Hargey: Not just from them, but from the madrassas, from the community. It's pervasive. I mean, just to blame the mosques would be unfair, but I think we need to examine Islamic theology and especially certain fatwas and so forth that denigrate women, that patronises them, that regards them as chattels, as possessions; for example, Saudi Arabia, looked upon as the so-called leader of the Islamic community, they don't even allow the women to travel unaccompanied by male relatives. So we have a whole mindset that needs to be combated. I think that what we are trying to do is to solve the problem at the end of the production line. It's never going to work. We need to go to the beginning of the production line and see how women and men...how women are objectified in Muslim society.

Ed: Sheikh Ibrahim Mogra, two very clear points: The first being that that's the message that comes through in all sorts of ways in the Muslim community; and the second that that's directly related to this kind of case. What's your response to those two...?

Sheikh Mogra: I totally disagree with most of the assessments and analysis of Dr. Hargey there. The mosques and the madrassas would be the last place where encouragement would be taught for sexual misbehaviour...

Ed (interrupting): That's not what he's saying though. He's saying that a view of women comes across that leads to that.

Sheikh Mogra: The teachings of Islam and the theology of Islam is very, very clear. Sexual relations can only be between a male and a female who are married to one another. The fatwas that are issued are very, very clear about that and this idea of suggesting that a distant country is influencing us here, how our youngsters have behaved on the street is absolutely...something very difficult to connect with this issue. When the specific example of women not being allowed to travel alone..I'm just thinking if these young girls, who have been exploited and have been pounced upon, had been accompanied by a male then they would have  been safer. But let's not go into the situation of distant countries. For me the issue here really is 'What can we do now to ensure that this menace is eradicated from our societies and from our communities.

Ed: But, forgive me, you didn't quite address the point - or at least I didn't think you did - which was not to do with the teaching on sexual relations in Islam, it was to do with the attitude to women that comes across in all sorts of different ways.

Sheikh Mogra: Well, let me share with you what Islam teaches about the attitudes that Muslims should have towards women. Their is very, very categoric teachings within the Koran and within the Kadith traditions that the woman is to be honoured, is to be given respect and dignity. We cannot allow cultural practices to be packaged as if they were Islamic teachings. They is Islam, and the teachings of Islam, which is very clear and there is the cultural behaviour which is be condemned because it is does not fit with the teachings of Islam.

Ed: Let me bring in Dr. Hargey there. Your response to that?

Dr. Hargey: Yes, we due respect, what the sheikh is talking about is about Muslim attitudes towards Muslim women, not to non-Muslim women. This is the issue....

Dr. Hargey: And for the sheikh to talk about Saudi Arabia as some distant country is very disingenuous. Thi is the country that brings a Wahhabi type of Islam right to our shores. so we can't just dismiss that. But the issue here is really how Muslim society, whether it is the imams, whether it is the mosques and madrassas or elders, whatever, how they view women of the other - the other meaning 'the kaffir women' - OK, the kaffir women, the non-believing women...

Ed (interrupting): ...the kaffir women are the non-believers?

Dr. Hargey: Yes, the non-believing women are fair game, they are easy meat...

Ed: Sheikh Mogra, I'll come back to you in a moment.

Dr. Hargey: ...because they are are not fit, because the way they dress they are inviting this kind of thing in their mindset...

Ed (interrupting): All right, let...Sheikh Mogra, you've told us how things should be but Dr. Hargey is presenting us with a picture of how he thinks thinks actually are.

Sheikh Mogra: There is no space and room in the teachings of Islam where Muslims have got license to abuse other non-Muslim women just because of the way they dress, the way they live, or whatever their lifestyles are. The bottom line here is that we have an issue in our country where young women are being abused, just because...

Ed (interrupting): Forgive me, we're running out of time. I just want a quick response to that from Dr. Hargey.

Dr. Hargey: So why is it that all the victims are non-Muslim white women, young girls? There isn't a single Muslim girl that's been groomed and abused by a Muslim gang. So clearly there's an issue of race, religion, culture, whatever, and we should stop burying our heads in the sand and talk about the wonderful hadith and talk about what Islam says, because the reality is very different on the street.

Ed: Forgive me, I'm going to have to end it there. It's fascinating stuff. Thank you both very much indeed for coming in to talk to us this morning.