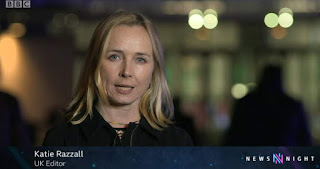 Katie Razzall's intro looked promising. Things might be looking up! Judging from the build-up, it would be easy to assume the BBC had finally been “listening”

But no. It turns out the BBC had been listening, but not to us. To each other.

Dimbles looked worn out.  Quickly glossing over his opening statement.......

..he too began promisingly:

“and I think there are major, major problems with the BBC at the moment […](Hall’s) successor will face major challenges!!”

Gesticulating wildly, he even cited the BBC’s coverage of Brexit:

So one might have anticipated an insightful analysis of the BBC’s hideously white woke agenda. Then he went and spoiled it all by saying something stupid, like:

“Look at how Fox News demonstrates ‘not listening to the people’ by promoting Trump!’”

Yes, David; in your personal alternative reality where ‘yes’ is ‘no’ and ‘up’ is ‘down’ and 'the BBC is a mouthpiece of the Tory gov’ment'.

He turned to Emily Maitlis:

“People like you who sit in the studio, night after night, trying to be fair - you do your best to listen to every voice….”

and then I suddenly realised that Maitlis was now trying to put the case against herself in a kind of despair - probably because no-one else was putting it, and she thought ‘I’d better get that in quick before someone mentions Rod Liddle'.  (H/T Monkey Brains) It was getting very weird.

It seems their suggestions about how to resurrect the BBC’s falling ratings are: More Trump-bashing. More diversity.  Ash Sarkar on every panel.  More pandering to the youth market. (Not just ordinary pandering, but especially cloth-eared M & S pandering - to a market they’ll never win over -  while cocking an M & S snook at their core customers (who must have been young once)

Russell   Jo   Katy Brand was a runner? I can’t quite picture that.

I nominate Jeremy Corbyn for the next D.G. As I said earlier, killing two sits vac with one stone - where do I send my three quid?