75th anniversary of the liberation of Auschwitz

Everyone who is anyone will be there. Prince Charles* will be there to represent the UK.
Apparently, the Poles and the Russians portray each other as collaborators and appeasers and President Duda thinks Putin is being given carte blanche to virtue-signal, whereas he is not. Of course, there’s more to it than that. 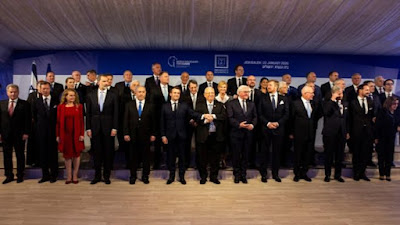 “Andrzej Duda is staying away in protest at not being invited to speak unlike his Russian counterpart Vladimir Putin, who he has accused of distorting the history of the Holocaust and the war to attack Poland.”

“His decision has threatened to overshadow the event which will bristle with world leaders and bring parts of Jerusalem to a standstill. 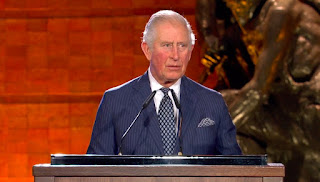 *Kay Wilson (the British born Israeli who was attacked and left for dead by two Palestinians who attempted to murder her, and succeeded in murdering her friend Kristine Luken,) wrote to the British authorities requesting a meeting with Prince Charles “for a few minutes during his four-day visit”  -but they said they are ”not interested.”

The BBC traditionally covers Holocaust Commemorations, deriving whatever fitting amount of ‘misery memoir’ material out of the occasion they deem appropriate. (Wringing it out till the pips squeak.)

As Israel thrives and flourishes, sympathy for Jews drains away and the media’s mawkish quest for pathos alights on Gaza and the Palestinians who, as is their wont, capitalise on this interest so cannily that the media over-shoots with sufficient chutzpah to equate “the plight of the Palestinians” to the Holocaust.

Just as one can’t mention antisemitism these days without Islamophobia and all forms of racism tagging along for the ride, the BBC can’t commemorate the Holocaust without someone trying to play down the enormity of the attempted extermination of the Jews by bringing up “Israel” and “the occupation” as a kind of mitigating factor.


“The State of Israel is now a regional power. For decades it has occupied Palestinian territories. But some here will always see their nation through the prism of persecution and survival.”

Just for clarification, and for anyone less geeky than Craig and me, here’s an easy to remember wimmin-only digest of the BBC’s Middle East correspondents:

Orla Geurin is the Irish voice of doom who has form when it comes to Israel.

Barbara Plett (or Plett-Usher) is the one who wept at Yasser Arafat’s dramatic air-lift from his compound.

Not to be confused with
Lyse Doucet, who oversaw the conveniently mistranslated substitution of the word ‘Yahud” for “Israeli”  in her Children of Gaza film. "Everyone knows they (Palestinians) mean ‘Israeli’ when they say ‘Yahud’ (Jew)" she argues. The I/P conflict in a nutshell, really. Palestinian Arabs reject Israel. … is it ’cos they is Ya…hu?
(Lyse  doesn’t like being confused with Plett.)

Yolande Knell is on maternity leave.

Update:
Stephen Pollard: The BBC Has shamed itself. 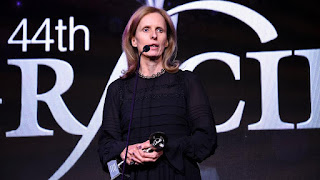 Stephen Pollard in the Jewish Chronicle:

"I rarely accuse individual journalists of bias. As one myself, and editor of a newspaper, I have come to the conclusion that – other than with those writers who explicitly push a particular view – most reporters try their best to get "the story". What is attacked as bias is, more often than not, a failure to understand the subtleties and nuances of a situation. Bias is usually just ignorance.

But there are exceptions to every rule and one of those exceptions is Orla Guerin, the BBC correspondent. Those with long memories will remember her time as its Jerusalem correspondent. Between 2001 and 2005 her reports were distinguished by what the Israeli government rightly described in a – rare- official complaint to the BBC as her "deep-seated bias against Israel".

Although Ms Guerin long ago moved to another post, she has occasionally returned to Israel to share her views with BBC viewers.

Last night (and repeated today), BBC News broadcast her latest report from Jerusalem. Even by Ms Guerin’s standards, this was something truly shocking. In all honesty, I cannot recall a more foul – sickening, indeed - report by any journalist, either in print or broadcast.

The context was the ceremony taking place in Jerusalem today to mark the 75th anniversary of the liberation of Auschwitz. Ms Guerin interviewed a survivor, perfectly properly. What followed, however, was depraved.

Ms Guerin’s report begins by describing film of Yad Vashem’s Hall of the Dead. Ms Guerin continues, over footage of IDF soldiers entering: “Young soldiers troop in to share the binding tragedy of the Jewish people.” As she voices her report, the camera shows more IDF soldiers.

“The state of Israel is now a regional power. For decades it has occupied Palestinian territories. But some here will always see their nation through the prism of persecution and survival.”

It is difficult – no, it is impossible – to see this as anything other than Ms Guerin’s hatred of Israel spilling over into a desecration of the Holocaust. On this most solemn of occasions, linking the murder of six million Jews with Israeli occupation of the West Bank is simply obscene.

Note that ‘but’ in her final sentence. You Israelis, she is saying, are the bullies now, with your military and your occupation. ‘But’ you have the gall still to think of yourselves as being the persecuted.

Forget the historical illiteracy. Forget the self-righteous sneering. Forget everything about this despicable report except this: Ms Guerin represents the perfect distillation of the phenomenon which obsesses over Israel, the only sanctuary in the world for Jews, and does not merely decry the Jews having the right to such sanctuary – and thus, in the context of the Holocaust, the right to exist – but which turns the murder of six million Jews into an act of which it is the Jews who should somehow feel ashamed. It is the Jews, in other words, who do not live up to the memory of the Holocaust.

This attitude – never explicit, of course – is all around us. It provides the context for Labour antisemitism, for the bias of newspapers like the Guardian, and for rising antisemitism generally.

It is to the BBC’s eternal shame that it allows such a piece to be broadcast.