The BBC at war 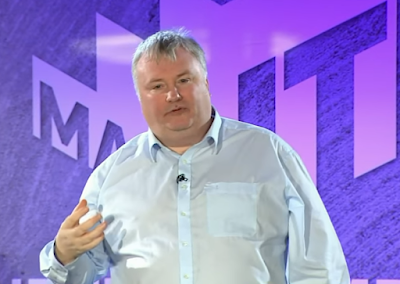 In contrast, another of the BBC's highest-paid stars, Stephen Nolan, has hosted a quite extraordinary 45-minute podcast about the BBC's relationship with the campaign group Stonewall, asking the question Is the BBC too close to Stonewall?
It's an astonishingly full-frontal assault on his own employer, akin to whistle-blowing, and he wonders at the end - not entirely jokingly - if it might bring about the end of his BBC career.
I'm sure it will enrage many of the woker staff at the corporation and that extreme trans activists will be coming after him.
Stephen Nolan may not always be popular hereabouts but this podcast is greatly to his credit, along with that of his colleague David Thompson.
And here's where it gets even more interesting because the BBC itself deserves credit to for making the podcast available even though the podcast reveals so much that discredits the BBC and for posting a damning write-up by David Thompson on its news website.
To sum it up:
- A number of journalists within the BBC are deeply uncomfortable about the corporation's relationship with Stonewall but frightened to speak out.
- The charge against the BBC is that the BBC has breached its code of impartiality and its independence by aligning itself to Stonewall, being led by Stonewall, being 'marked' by Stonewall, paying money to Stonewall, using Stonewall's language, appointing an LGBT correspondent who fronted Stonewall's TikTok videos, and that their involvement with Stonewall has had a chilling effect on BBC editorial staff.
-  The BBC has refused FOI to give the programme the correspondence they've had with Stonewall, and refused put up anyone for interview with the programme, and didn't answer specific questions put by the programme and later referred the programme to their previous unrevealing statements.
Here's a representative quote from towards the end, showing Stephen Nolan's frustration at the runaround the BBC has been giving him:

Stephen Nolan: We went back to the BBC to ask them about the 'style guide', We asked, 'Were Stonewall consulted by any part of the BBC about the language used in this 'style guide'? Were Stonewall definitions used elsewhere in the BBC considered when drafting this  'style guide'? How does the BBC explain its definitions being close to those used by Stonewall than the dictionary definition? We also asked them about the Allies training and about the use of 'The Genderbread Person'. What did they do? They just referred us to their previous statement. An organisation that asks many, many people, every second of every day, to appear on its outlets across the world couldn't find a human being to speak to its own organisation on this podcast and to you, the audience. Not one living, breathing human being could speak. All we got was a reference to the previous statement.

And an exchange between him and his BBC colleague:

David Thompson; Just one thing to point out why this is important and why this language is important to us as journalists. You know how tricky it is when we're doing these debates. We've debated the very issue of whether or not it's transphobic for a gay person not to want to date a trans person, for example. Well, if you go by the BBC's Style Guide that's closed off, that's decided. Homosexuality, according to the BBC, is about people who are attracted to people of the same gender. So that controversial debate is now summed up in the BBC Style Guide and they've made their position really clear.
Stephen Nolan; I get it now. I see. You're smarter than me, so I get it now. So, basically, the BBC is stating as fact, because it's changed its language, if a male, if a gay male...in the BBC's wording now, that means they're attracted not to someone with male genitalia but to someone also who says 'I'm a man' whether they have a vagina and breasts or not.
David Thompson; Yeah. It's obviously not just about the genitalia, A lot of people will say that, but it's about the sex of the person, the natal sex, how they were born - the entire package, if you want. So people are same-sex-attracted not according to the BBC anymore. 'Homosexual' means 'people of either sex who are attracted to their own gender'.
Stephen Nolan; And the other big question here is, who signed off on his? Cos if this is effecting the language throughout the organisation then someone very, very senior must be signing off on this.
David Thompson; These decisions are signed off by BBC News. Now this is an area of contention as well; Many bisexual people would say it's about being attracted to both sexes. The BBC now define 'bisexual' ''an adjective to describe someone who is romantically and/or sexually attracted to more than one gender''.
Stephen Nolan; So the BBC has now redefined the definition of 'bisexuality'?
David Thompson; And 'homosexuality'. So they've redefined 'sexuality' to make it more about gender than sex, right at the heart of this whole debate.

It's all rather intriguing, as if a BBC civil war is playing out before our eyes.
The cynical part of me has read stories about the BBC planning to follow their regulator Ofcom's lead by pulling back from Stonewall and wondered if this podcast series was part of a manoeuvre to give some cover to that break, but there seems to be a much deeper battle going on for the soul of the BBC and Stephen Nolan appears to be leading the charge for one camp.
Posted by Craig at 15:44