Is the BBC 'more Nazi than Hitler'? 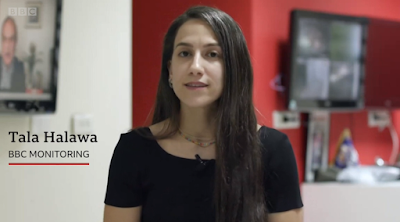 The indefatigable GnasherJew account on Twitter continues to highlight and fight antisemitism.
This morning they came across a BBC journalist called Tala Halawa, whose LinkedIn page reads:

Digital Journalist
Company Name: BBC Monitoring
Dates Employed: Jul 2017 – Present
Employment Duration: 3 yrs 11 mos
Location: Ramallah
Palestine Specialist in BBC Monitoring: specialized in Palestinian affairs and the media, as well as covering the Israeli-Palestinian conflict. In addition to reporting on the politics and media of Jordan. Produced and reported for several services in the BBC such as the Arabic website and TV, and the BBC World Service (radio and TV).

GnasherJew was objecting to the BBC and the Independent promoting someone they consider an antisemite [Eman Asker] and Tara Halawa of the BBC was one of those criticised for considering this particular person ''an acceptable voice to promote on Israel/Palestine''.
Here's how the thread continues:

She's deleted her #HitlerWasRight tweet now, but it's been captured for posterity: 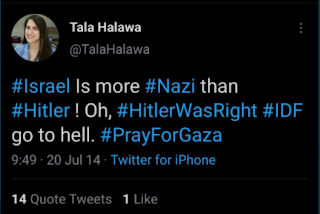 More difficult questions today for the BBC it appears, and GnasherJew has already begun asking them:

BBC, can you explain why your journalist Tala Halawa is stating that “Hitler was right”? This is absolutely disgusting antisemitism.