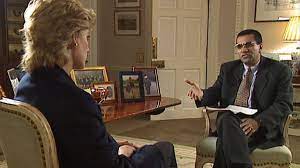 What an idiot I am; and an absolute fool for wasting all those precious hours-I’ll-never-get-back trying to be forensic and scrupulous and providing evidence in links that no one can ever be bothered to click on.

Why on earth did I mistake diligence for persuasiveness? I was mad, probably visualising justice, like in the good old black and white days when truth prevailed, and all 12 angry men came round in the end against all the odds even though they were impatient, tired, and dying to get home to snap at the wife and kids.

I’m prone to over-thinking and quite slow on the uptake but thankfully I’ve seen the light praise be!  I now realise that no one cares about facts. Sorry, “facts”.

I accidentally watched part of a special parliamentary inquiry into MartinBashirGate on T V.  The one where a select committee of MPs sit in a socially distanced horseshoe in order to humiliate certain hand-picked individuals and make them squirm. It reminded me of a cross between a severe dressing down by a committee of headmasters, and an interrogation by the European Court of Human Righteousness.

To be fair It was shown on the actual BBC. Tony Hall, Alistair Burt, and the current D.G. Tim Something-or-other came in for a grilling.

they declared, one by one.

“It was that rogue Bashir. How could we have known? None of us had ever even heard of him”.

(Funny dat. I’d heard of him and I’m not even a Director General of a major broadcasting organisation)

“Bashir’s errant Panorama was a one-off, because believe me (us) Brand Panorama represents gold standard BBC.”

But what about a certain Mr. Savile, asked no-one whatsoever, and a certain John Sweeney? Weren’t they Panoramas too? Or Panodramas as per a recent, witty jest.

You may well think that all Panoramas Matter, but poor little Martin Bashir was thrown under the bus and hung out to dry; don’t feel too sorry for him though because he’s still on full pay! Not that I can be arsed to check that out as a fact, what really matters is it’s how. I. feel.