Some observations about current issues for want of a better title

Do you remember the early days of this blog? In our naivety we posted long-form pieces covering acres of space, sometimes utilising the ‘read more’ button, and we got away with it!  Scroll down and down and not be back in time for lunch. (When I was a lad) everyone had a massive attention-span. What happened?

I wanted to say something about GB News, but the jury still needs more time to consider.

Meanwhile, I’ll just describe the weirdest interview ever. Dawn Neesom was standing in for the excellent Nana Akua and the topic was the stabbing of Salman Rushdie. 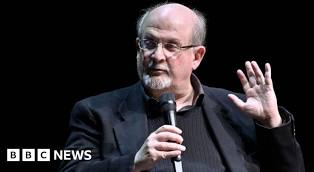 For some inexplicable reason, the opinion of Imam Ajmal Masroor was sought. One may remember this excitable contributor to The Big Questions from back in the day. Ever passionate on matters appertaining to the ROP and nigh impossible to shut-up mid-flow, the interview was conducted over the phone because Masroor happened to be aboard a fishing boat. (!) Why anyone at GB News would seek such a highly-strung personage’s opinion on the Rushdie incident at all is a mystery but with the extra obstacle of engine noise his insights on the matter were effectively drowned out.  Neesom’s fawning intro and post-interview outro revealed a profound chasm between our (hers and my) interpretation of what we’d just heard (or why.)

I could say GB News feels slightly claustrophobic/repetitive with the limited number of hosts whose over-exposure might have propelled them to premature personality-hood. I have no specific criticisms though, apart from a general ‘less is more.’  There’s a definite need for what they’re doing, so let’s stick with it.

I should mention the attempted assassination of Rushdie itself.  I hardly watch the BBC now but I made a special effort to do so. The BBC’s coverage seemed no better or worse than what I’ve seen of Sky, Al Jazeera, ITV, etc.

We had a fair bit of “we don’t know what the motive was” from other sources as well so I won’t single out the BBC for shoehorning a gratuitously over-cautious and ridiculous statement into its reports. I know I’m not the only one who finds this preposterous.

I confess I don’t warm to Sir Salman personally. I understand over the years he has had more wives and glam lady companions than absolutely necessary, which doesn’t attest to the soundness of character that is being wishfully projected onto him since he’s achieved near-martyrdom, and he does remind me of Mr. Bean. Also, I’ve never had the stamina to plough through difficult prose but I must admit some of the outrage about the writer’s attempted assassination appears somewhat opportunistic in its Dash to Bash Radical Islam, but that’s a bandwagon I’ll willingly jump aboard.

Outside the hospital where Rushdie is being treated, the America-based BBC presenter Nomia Iqbal, a British Muslim, appeared suitably opposed on principle to violent responses to blasphemy  However, I found myself wondering which side of the blasphemy fence she sits on when the violence is directed towards Israelis, in which case, as any fule kno, it’s the radicals that get the free pass.

In the interest of trying not to be a miserable, negative, and ill-informed commenter on something I know little about (which is a failing I always accuse others of ) I’ve read several articles on Rushdie by far more enlightened and literarily-articulate writers than I’ll ever be, and I have to conclude that he’s not such a bad bloke after all. And it goes without saying that any critic of radical Islam is fine by me.

Melanie Phillips sets out the issue forensically and thoroughly here and isn’t at all mean about Mr. Rushdie. She passes on some astute quotes from him.

Perhaps his narrow escape from death will amplify his words of wisdom until they properly resonate with the cowardly media.

To brush up on my 'Rushdie' I read:

Salman Rushdie warned of dark times and we ignored him

Those who argue that words are on a par with violence are grievously blurring a sharp line, writes Bari Weiss in Monday's The Times

Salman Rushdie won’t be the last

How we gave up on Salman Rushdie

Britain saw his fatwa and internalised it

Finally, wouldn’t it be nice if GB News could attract a wider range of adverts, particularly the Welsh ones with their erratic sound levels? They are so amateurish that they make normal adverts look sophisticated. I understand it’s something to do with a boycott. Am I right?