27th January.
Harry’s Place notes the antisemitic Gerald Scarfe cartoon which, for some unknown reason, the Sunday Times has decided to publish on Holocaust Memorial Day. The cartoon wasn’t topical. It wasn’t original. It wasn’t witty. It wasn’t even very well drawn.
If it was anything at all, it was an attention-grabbing, going-through-the-motions thing on the part of Scarfe and the Sunday Times.

When I hear the likes of cartoonists Martin Rowson and Steve Bell being feted on the BBC, as they frequently are, I marvel at the gullibility of their admirers, who mistake stiff, laboured, overworked, elaborately detailed drawings for wonderful draftsmanship, and lazy unoriginal, cruel ideas for insightful, politically astute commentary.
Most of their ‘anti-authoritarian’ ideas are blunt, not cutting edge. Antisemitic, not critical of Israel’s policies.

It’s ten past eight on Tuesday 29th January.
I’m listening to the Today programme and we’ve been promised an item about *that* Gerald Scarfe cartoon. So Rupert Murdoch has said sorry, and Scarfe has expressed regret that it was published on Holocaust Memorial Day, (but he has prepared 364 antisemitic cartoons for the rest of the year?)

Oh, the item is on. They’ve got Steve Bell on the air, and he has accused Stephen Pollard of throwing meaningless terms like “blood libel’ about, while he himself uses the libelously inappropriate term ‘ethnic cleansing’ to characterise Israel’s creation. 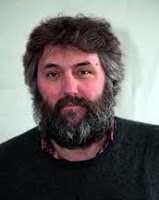 Steve Bell is a loud-mouthed bully with supremely ill-informed opinions, which came across loud and clear. He verbally shoved both James Naughtie and Stephen Pollard aside, behaving like a bulldozer in one of his own unpleasant cartoons. 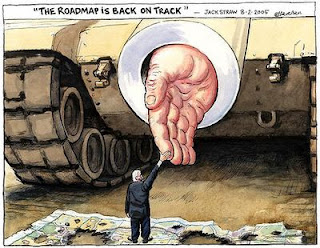 Sadly too many people share his ignorance. Contradictory narratives surround the Israel/Palestine conflict, and to varying degrees the BBC has chosen to adopt and disseminate the Jew-hating, 'pro-Palestinian' version, which has played no mean part in bringing about a worrying 1930s echo to the state of affairs we can see now.

No matter how many times websites like BBCWatch and Harry’s Place put forth the case for Israel with much substance and eloquence, there are many many others who put forth their own favourite case against.

Since neither side is particularly receptive to the views of the opposition, it seems it ultimately boils down to a matter of ‘whose side were you on in the first place?’ Having said that, the pro Israel side is by nature very much more open to debate than their opposite number.

With some notable exceptions, Israel's supporters find it less difficult to listen and engage in debate. They are more likely to set out their argument with clarity, whereas the pro-Palestinians seem to get away with innuendo and snide remarks based on myths like the ones Steve Bell relies on, putting their opponents on the defensive.

As a result Israel’s detractors always seem able to frame the debate. Over and over again it’s on their terms. For instance, must Israel contemplate living side by side with a state-full of  Palestinian citizens who refuse to renounce violence and won’t even recognise its neighbour’s right to exist? Therefore, as a precondition, Israel could reasonably demand that Abbas sorts this out before going any further.
But Israel has not made any preconditions. Instead, the spurious issue of settlements has somehow been established as a precondition. A precondition, not for peace, but for the resumption of talks about peace. Oy!

When a debate does take place, people quote historians to bolster their case. For every pro-Israel historian there is a revisionist or an Arab historian who says the opposite. People cite websites, journalists, writers, television, radio, celebrities, their uncle and pub philosophers of all shapes and sizes, and cherry-pick bits and pieces which back up their argument.  We no longer need to use our brains. We just revert to type. After the argument, no matter what, we ‘snap to grid’.

A sort of anecdote.
While passing round the port in the correct direction, titled aristocrats I happen to be acquainted with recount long-ago adventures in the Middle East; hair-raising near-death scrapes involving armed and dangerous ‘Johnny Arabs.‘ They’re apt to chuckle, with nostalgia and a strange affection for people they portray as duplicitous, volatile, sneaky, untrustworthy, exotic foreigners.
They know. They know what characteristics define people of a certain religion, yet they still take their word above Israel’s, because without any evidence or personal experience, gut feeling leads them to distrust the Jew-boy even more.
And they’re really nice folks, who I like a lot. They’ve got wit, humour, generosity, manners, energy, and a genuine respect for the less privileged. Their political views seem to be an odd mixture of Conservative and left wing socialist.

So, what’s new? The antisemitism that pervades most  left-wing ‘progressive’ organisations and much of the media trundles on, gathering momentum like a hideous snowball and gaining acceptance the bigger it grows.

This interesting article on BBCWatch is about Kevin Connolly, who has tried to explain that the BBC’s off-beam predictions (that the elections would bring Israel further to the right) weren’t wrong after all, because Israel’s victorious ‘centrists’ are what we would consider ‘the right’.
Connolly deduces this solely because of Mr. Lapid’s position on Jerusalem, which the BBC sees as the ‘right-wing’ position.  This is because the BBC believes that, should the ‘obstacles to peace‘ ever be overcome, East Jerusalem must be the capital of the new peace-loving Palestinian state, in accordance with the Palestinians’ demands. Even though they can clearly see the how lovable the antics of Johnny Arab actually are, with their very own eyes.

“That Mr Lapid is labelled a centrist perhaps shows you where the centre of gravity of Israeli opinion on such matters lies these days.” Opines Connolly.

Oh! so un-self- aware! The centre of gravity? Where does he think the BBC’s centre of gravity is? The CENTRE? Puh-lease.
As for Steve Bell. I hope the majority of listeners will have grasped what a fool he is. But I somehow doubt it.