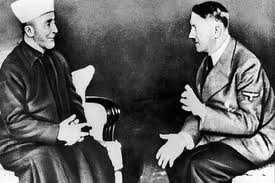 This is a kind of postscript to my previous piece about MP David Ward's unfortunate remarks.

Melanie Phillips nails the issue, as usual, by pointing out that whether or not the idiotic man blamed “The Jews” rather than “just some of the Jews”, the Israelis, or the Israeli government is neither here nor there. It's beside the point. Obviously, “Israel is not trying to exterminate the Palestinians”  If they were trying to exterminate them, they could. And the fact is “The Palestinian population has more than quadrupled since 1948”
There * is * no * equivalence *  between *  the * Israelis *  and * the *  Nazis * 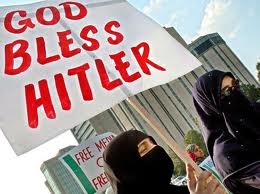 However, Israel’s neighbours, mainly followers of Islam, are not bashful about their stated aim. Like the Nazis, they intend to exterminate Jews. That is, the Israeli government, the Israeli Jews and, where possible, all the other Jews. Is that clear? Soon, when Iran perfects its bomb, it will be able to do this.

We’re all born with the survival instinct, otherwise the human race would struggle. It would be unsustainable as they say. We * strive * to * exist.
A variation on this theme is the suicide bomber, the martyr, the shahid. Even by this act of supreme stupidity they are doing the same thing, because in their deluded imaginations, they are after everlasting life. In paradisio.

The lesson that the Jews have learnt is the lesson that all sentient beings must learn. Once bitten twice shy. If someone hurts you once, if you’ve got any sense you don’t go back for more; you avoid the same thing happening again.

That’s why we say “Never again” We mean 'this must not happen again'. Not by the Nazis. Not by the Arabs. Not by the BBC. That is to say, the Jews will defend themselves this time. They will take measures to avoid it happening. That is what they must do, are doing, and Please G-d, as Jews are wont to say, will continue to do.

The situation in the Middle East has been thoroughly misrepresented over decades, largely due to the BBC.
Melanie Phillips:


“the entirely false belief that the Israelis have supplanted the indigenous people of Palestine and towards whom they are now behaving in an unconscionable way is now the default position amongst liberals and the left, and has also made serious inroads amongst the more isolationist and ignorant British conservatives.”The belief that, in Israel, the victims of one of the greatest crimes against humanity are themselves now guilty of crimes against humanity is the collective libel that has become the default position amongst the British intelligentsia. And as Ward suggested in his remarks on Sky, only those Jews who themselves endorse this libel by denouncing Israel are to be considered free of this taint.”

So when we say “Never again” we’re not saying no-one must ever hurt anyone ever again, no matter what. We’re not saying “Because of the holocaust, there must be no more fighting, no more self-defence, no more retaliation, no more Jews.

If anyone needs a lesson, it’s those who set out to exterminate others, not the intended exterminee. TM

Now as for silly Mr Ward. He’s not all that silly I suppose. He’s taking measures. The tactics of survival. Pandering to his constituents. Who, in his position, wouldn’t? If Bradford is full of people who believe Israel is a like a cancer that must be excised, whose fault is that?