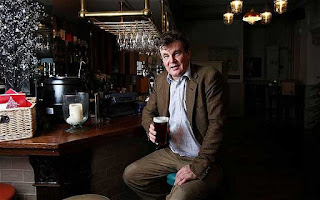 I realise I’m in a minority. Because I support Israel, and also because I don’t drink alcohol. I don’t like it, and I don’t like being with tipsy people.

Peter Oborne makes two commonly-held, and in my opinion wrong-headed assumptions; one, that everyone lives in as much fear of an all powerful Jewish Lobby as he does, and two, that everyone shares his inability to function without constant top-ups of booze.

I’m mystified by the fashion for girly, pretend confessionals written by journalists bragging about their dependence on alcohol. They must think this weakness is endearing somehow, since  they bang on about it publicly all the time. This is incomprehensible, as is shameless advertising of one’s addiction, at once trivialising it and wearing it as a badge of honour.

Perhaps Oborne’s anxiety over the negative effect Jews and Israelis might have on his well-being comes from booze-fuelled paranoia, but his obsession about the so-called Jewish Lobby is widely known following the barmy, but still inflammatory, documentary that was broadcast on Channel 4’s Dispatches a while ago.

Why the Telegraph gives credence to a notorious anti-Israel bigot and booze-dependent hack by commissioning him to write biased feature articles about the Israel/Palestine conflict in their newspaper is both perplexing and bewildering.

For some obscure reason Oborne was sent to Israel to cover the elections, where he managed to get the whole thing wrong by parroting the BBC’s doom-laden predictions that the Israeli far-right would soon be running the asylum and scuppering their precious two-state solution, when the opposite was the case. The viscerally anti-Israel BBC’s cabal of reporters flooded the air waves with wrong analyses, but no doubt they’ll keep their jobs, but Oborne’s twin shortcomings are (should be) the final nail in his credibility as far as the Telegraph is concerned.