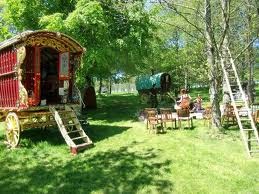 As everyone now seems to be aware, tomorrow - 1 January 2014 - we in Britain will be saying An Nou Fericit! and Щастлива Нова Година! ('Happy New Year!') to the first of an unknown number of Romanians and Bulgarian immigrants as border controls are lifted.

Among those expected Romanian and Bulgarians newcomers, the most eagerly anticipated arrivals are surely the Roma. Bunting is presently being put out across the length and breadth of the country to welcome them - and, no, they won't steal it all!

Putting its own bunting out, BBC Radio 4 broadcast an interesting documentary last night, Gypsy Pride and Prejudice, which looked at our own native Gypsy population and its place in British society (or, perhaps more accurately, not in British society).

Elinor Goodman, former political editor of Channel 4 News, allowed us to hear the voice of Britain's Gypsies - and a very pleasant bunch they all seemed. Plus David Essex was on hand - and who doesn't like him?

Elinor did interview some non-Gypsy residents from a village who objected to a planning application from some local Gypsies and asked them some nicely-loaded questions implying that there were less-than-wholesome reasons why the local residents were against the granting of that planning application. Their denials sounded suitably hollow, as the context demanded (and also, presumably, as the editing allowed). Plus a chap who sounded a bit like Pat Condell denounced multiculti, metropolitan, politically-correct lefties who defend Gypsies, saying they bring all the trouble and resentment on themselves. His neighbour, a pleasant Gypsy, disagreed.

All very reassuring. Nice Gypsies, not so nice non-Gypsies. Yes, there may be distrust on both sides and prejudice too, but the Gypsies are OK really and what could possibly go wrong when the Roma of Romania and Bulgaria finally arrive? 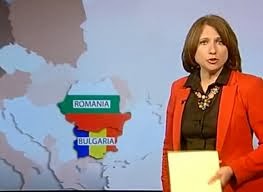 Despite the hand-wringing of some well-meaning non-Gypsy types, England's Gypsies are quite happy to be called 'Gypsies', much preferring that to being called 'Roma'. Plus, despite the nationalist aspirations of a few Gypsies who want a Europe-wide 'Romastan' (yes, really!), several of the English Gypsies interviewed were wary of their East European 'brethren'. It seems as if they think they could give them a bad name, as well as cause tensions. Oh dear.

Intriguingly, and returning to the issue of the pre-existing tensions between native Gypsies and native non-Gypsies, the most militant-sounding English Gypsy by some way on the subject was Jake Bowers. Jake's even gone so far as to coin the word 'Romaphobia' to describe the prejudice he believes Gypsies are subjected to (by us non-Gypsies).

It didn't come as a surprise to me to read that he was the man the BBC chose to present a programme aimed at the English Gypsy community (on BBC Three Counties Radio) a few years back. When the impartial BBC's on a mission to go 'social good', Jake's exactly the sort of guy they want.

I for one am fully reassured anyhow and will be leaving my front door wide open tonight, putting out some Bulgarian red wine and some glasses for the newcomers and going to bed happy in the knowledge that Britain is about to become even more multicultural in 2014.