On Coyotes, BBC Radio 4, the Guardian and the Booker Prize 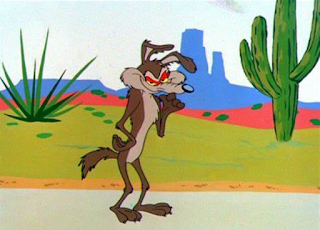 Listening to Radio 4's book group asking questions to Booker Prize-shortlisted author Diane Cook on last night's Front Row made me cringe. The whole thing sounded socially awkward. The four women chosen to put the questions, alongside presenter John Wilson, weren't professional interviewers for starters. They were just Radio 4's idea of four 'Everywomen' - three English women who sounded exactly like every other person's idea of a typical Radio 4 listener, plus a woman from south India with a dodgy phone connection. (The latter was invited, I kid you not, to reflect 'the world'). So their questions were, understandably, ineptly put. They were literally embarrassing to listen to.

But isn't that the nature of the beast? What do you ask an author whose book you didn't like? And what if you don't like the heroine she's so subtly invented and who she likes but you don't? And worse, what if you really did like her book? What do you say then that doesn't sound clumsy or banal or hideously sycophantic?

Asking questions of writers or artists or directors or composers that don't led the amateur questioner into a deep, dark, dirty ditch of their own hapless making is something I suspect many people would find fiendishly hard. I certainly would find it hard, and I'm sure my questions would be just as toe-curling, or stomach-churning, as the ones put by the ladies chosen by Radio 4.

Hats off then to professional interviewers who get away with it, day after day - especially if they do it with aplomb.

Even the pros can get it in the neck though.

The same edition of Front Row featured an interview with Sofia Coppola. She's got a new comedy film out, starring Bill Murray, called On the Rocks. The clip the programme played from it made me laugh. It sounds like a very funny film. But John Wilson's interview with the director didn't go down well with some listeners.

I read an exchange on Twitter expressing grave disappointment in John for asking too many questions to Sofia that related to her father, Francis Ford. This escalated (as things do on Twitter) into claims that John Wilson had been "patronising and sexist".

But I thought John Wilson asked decent enough questions. Given that the film was about fathers and daughters, and that Sofia Coppola features in a soon-to-be-released revamp of her father's Godfather III, it's surely not that wicked a line of questioning? And if you're getting from the horse's daughter's mouth an insider's take on what could be a truly major movie event - a remake of Godfather III by Francis Ford Coppola including his daughter Sofia Coppola - why wouldn't you ask her about that as well as about her own film? You'd surely be a poor excuse for an interviewer, in my view, if you passed up that opportunity for a golden scoop by simply asking her to go on and on promoting her latest comedy, however fabulously funny it might be.

Going back to the start of the programme (and this post) however, Diane Cook's Booker-nominated debut novel sounds like the kind of novel that would win the Booker Prize - telling a dystopian tale of a planet Earth brought to its knees by human beings. Plus it's apparently a novel with plenty of "harrowing" passages - though there's supposed to be plenty of balancing beauty too. (I'm not sensing many jokes though).

I wouldn't really know what it's like yet, as I've not read it. All I've done is to look up Diane Cook and read a Granta piece by her from 2018 called On Coyotes.

Granta labels it a 'four minute read' but it took me well over ten minutes because I was relishing every section, every paragraph, every sentence, and many of the turns of phrases and individual words. And I've re-read it too.

It is very much On Coyotes, though it avoids mentioning the indefatigable Wile E. Coyote - which places Diane higher up food chain when it comes to writers avoiding the cheap and the obvious. I for one wouldn't resist the urge. I'm the sort who'd probably even add a picture of Wile E. to the top of any post I did that even barely mentioned coyotes.

There's absolutely nothing cheap about Diane Cook's writing in this piece though. I don't know which bit to quote, it's so perfect. (What more do you want from a writer?) So I'll just ask you to click the link and read it for yourself, in full.

I then went, on my new guiding principle of moving beyond my usual reading rounds, to a Guardian review of Diane Cook's novel and found a Guardian reviewer with the oddly Guardianesque name Hephzibah Anderson writing:

At the novel’s start, they [heroines Bea, "a sometime interior designer", and Agnes, her young daughter] have been in the Wilderness for three years and its harrowing opening scene tells you all you need to know about the extreme toll it’s taken: alone, Bea crouches with her stillborn baby, covering her with wilted leaves and sagebrush branches. For all its horror, it’s an understated moment – there is no keening lament, just cricket song and the soft tread of coyotes.

"And the soft tread of coyotes". Ah, OK. I'll have to quote the beginning of that Granta piece in full after all:

Across the lake in Montmorency County, Michigan, we heard the rhythmic bark of some animal. So rhythmic and so prolonged that we turned to the sound to try and make sense of it.

‘Was that a dog?’ my friend asked.

It was a bark to be sure. But.

‘It seemed too fast to be a dog,’ I said. The barks had such little space between them that I thought perhaps it could be an owl barking, thinking of the saw-whet’s escalating toots and how fast they get, a bit like a bouncing ball settling down to the table.

We were just about to conjecture some more when down the shore we heard a great cacophony.

For a split second, I thought it was the loons looning out their warning call: a ghostly yodel which a few days earlier I’d almost mistaken for the bugle of an elk. We were, after all, very near the elk capital of Michigan. Just as I was about to whisper loon, I heard the unmistakable eerie yips of the coyotes answering back to what must have been a family member.

And now read on, It gets even better...