A decade ago I remember a lively chat in the comments at Biased BBC about Countryfile's Ellie Harrison after she appeared on The One Show sporting an impartiality-busting CND T-shirt.

Some complained about BBC bias, but others said they'd forgive her anything and claimed they hadn't even noticed the political T-shirt covering her bust.

Of course, that's truly appalling #everydaysexism, guaranteed to make all of us self-respecting feminists (female or male or whatever) lunge for our handkerchiefs and our smelling salts.

Anyhow, Ellie - endlessly leg-flashing and ultra-conspicuously blonde - thrived and prospered at the BBC whilst simultaneously flagging up her fulsome commitment to feminism in media interview after media interview.

And now she's approaching that perilous age where many a brave woman before her has been controversially, and lawsuit-inducingly, dumped into the Countryfile thresher for becoming middle-aged, and has clearly gone ostentatiously out of her way to hit the headlines by talking divisive, BBC-friendly, 'woke' drivel about racism and the countryside.

(My sexist friends tell me she still looks great, so I'm sure she'll be safe for a few years yet. And, in response to the criticism about them dropping women for reaching middle age, the programme disinterred Radio 4's Charlotte Smith - one of those they'd culled in 2009 to bring in young, pretty Ellie).

Here's a flavour of what she said:

So there’s work to do. Even a single racist event means there is work to do. In asking whether the countryside is racist, then yes it is; but asking if it’s more racist than anywhere else — maybe, maybe not.

Until this point [the Black Lives Matter campaign], I believed ignorantly that me being not racist was enough. I believed that I should keep quiet and listen to black people. That’s because I read and loved every Alice Walker book as a teenager, have watched Oprah every day since I was a youngster . . . it wasn’t my problem.

There is a big and crucial difference between being not racist and being anti-racist. At times in the past I have given measured and polite replies to people — sometimes close to me — who had said racist things. But being anti-racist means being much clearer that it isn’t acceptable.

It’s our individual work to wrap our heads around history. The work also includes recognising the pain of the past and the lingering ambient racism we don’t get to feel. It means acknowledging that we have benefited from the past, the behaviours of many generations ago.

My favourite bit there was where she said, in signalling her virtue about racism whilst simultaneously signalling her virtuous recognition that as a white women she still needs to signal much more, "That’s because I read and loved every Alice Walker book as a teenager, have watched Oprah every day since I was a youngster".

That's still making me chuckle. It's the kind of line a truly great satirist would write.

Except, of course, it's not satire. 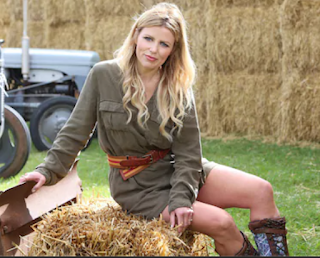 Though it may disappoint a certain, male segment of the Countryfile audience, I'm sure Ellie will realise what she has to do: check her white privilege, leave Countryfile and make way for someone better suited to tick BBC boxes.

The programme has been giving black and ethnic minority presenters a big push in recent years, but exponentially more still needs doing.

Hopefully, on their Christmas special this year, a newly-roasted John Craven will be served up for the endlessly diverse newcomers with stuffing and parsnips and horse chestnuts and a festive gravy made from a freshly-composted Tom Heap - something that would make a great cover for the 2021 Countryfile calendar.