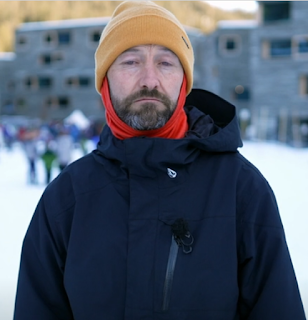 LunchTimeLoather brings us news that the BBC has published its response to complaints about "their 'more BAME people should be skiing' preaching" on Ski Sunday.

I think the word 'supercilious' best catches the BBC's tone here (though if you can think of other, better words, please note them below):

We received some complaints about a segment that looked at how snow sports could become more inclusive to people from all backgrounds, from those who felt it was inappropriate.

We do not agree that it was inappropriate to explore this topic. We do not agree that anything within this report was inaccurate, or biased against anyone who wants to take to the slopes. We included viewpoints and personal stories from multiple contributors as well as experts and commentators in the industry.

If you missed this (and I meant to post about it earlier)...

The fascinating thing - besides the very long, one-sided, dubiously-accurate report itself from a black grievance-monger made a main feature on the programme - was the behaviour of the two regular, white presenters.

There they both were, dressed in their ski gear, standing in the Swiss snow, and preaching like a pair of 'woke' John Calvins.

And they described the very long, one-sided, dubiously-accurate report itself from the black grievance-monger as "provocative and inspiring".

It was painful to watch them.

The white man (Ed Leigh) preached with particular earnestness, in a way that made me cringe.

"When you're in the majority you fit in, so why would you question it?", he said, confessing his sins, immediately after the white woman (Chemmy Alcott) had  said, "Almost everyone in these beautiful places is white".

And the white woman (Chemmy Alcott) literally stood in front of us on TV confessing her guilt at not having previously being sufficiently aware of the (alleged) problem of there not being enough BAME people on the ski slopes: "I'm going to be really honest here. As a person who has a voice in the UK snow sports scene I'm really embarrassed to admit that I didn't realise this was such a big issue".

They also committed themselves to 'the cause'.

No wonder people complained. It reeked of an in-your-face agenda from the BBC, but it also made for uncomfortable viewing.

Did Ed and Chemmy really believe what they said? Or were they made to stand there and say it and humiliate themselves, just so the BBC could tick off yet another 'woke'-pleasing item on a BBC mainstay?

I suspect the latter.

There are, of course, plenty of non-racist reasons why posh people and white European and European-ancestry people dominate the ski slopes. The feature glided over those disingenuously.

White working class people from Morecambe might be slightly more likely to appear on the kind of slopes that Ski Sunday frequents than black working class people, even black activists with chips on their shoulders, especially given that black people comprise a mere 3% of the population, but if I were to stereotype the kind of British people who do hog the ski slopes I'd brand them as classic BBC types - stars, presenters, journalists and (hideously white) executives - plus lots of other people with enough money and a sense of fun and adventure.

We know what the BBC was up to here, and all their huffing and puffing about how they "don't agree" doesn't disguise it.