As a blogger, I sometimes feel as if I'm dancing in the dark (hopefully with Monica from Friends) when it comes to the BBC.
What on earth is going on here?...
Actor turned politician turned London mayoral contender Laurence Fox tweeted this today:

Dear Rebecca Cafe from the BBC. Regulations aren’t imposed under the coronavirus act, but the public health act, and thank god we don’t live in a country where the prime minister makes the law. I’m not going anywhere. Kind regards.

He was responding to this from BBC online reporter Rebecca Cafe, sent by her to someone: 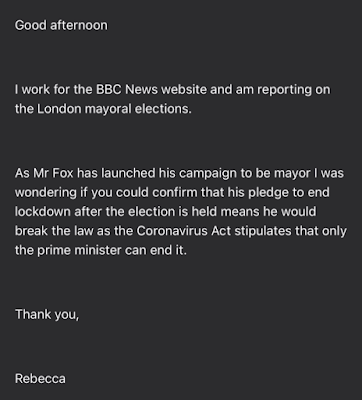