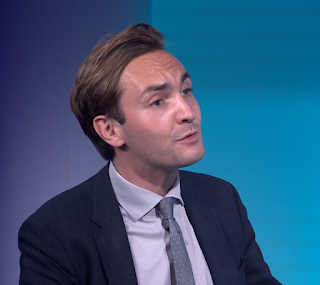 Just to recall a comment of mine from 10 July concerning the mooted appointment of former Huff Post editor Jess Brammar to the post of the BBC's executive news editor, despite her history of left-wing tweets:

An interesting part of this story is that Robbie Gibb communicated his reservations about Jess Brammar in a message to Fran Unsworth. Someone at the BBC has obviously leaked this.
Jess Brammar is part of the old Newsnight circle of friends on Twitter that includes my old favourite Lewis Goodall. Lewis and Robbie Gibb, as you'll probably remember, had a bitter Twitter spat over impartiality after Sir Robbie laid out a long list of reasons why Lewis's reporting wasn't impartial. I suspect Robbie Gibb was aware of her being in that circle when warning Fran Unsworth about appointing her to a senior BBC news management role.

Well, there's been a development on that latter front today. The BBC has made Lewis Goodall delete a tweet about Jess Brammar, attacking the Mail on Sunday: 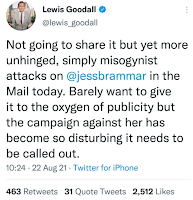 You can read the Mail on Sunday's ''unhinged, simply misogynist'' article by Glen Owen and Katie Hind here.