“BBC chiefs are lining up journalist and newsreader Clive Myrie to replace Emily Maitlis on Newsnight, The Mail on Sunday can reveal”, says the The Mail on Sunday.
My favourite Clive Myrie moment came five years ago when he appeared on Richard Osman's House of Games and had to locate Ukraine on a map of Europe. My flabber was well and truly gasted when, after TV presenter Angela Scanlon correctly marked her guess for where Ukraine is with a green dot, Clive, having given it time and thought, then revealed his orange dot for where he thought Ukraine is: 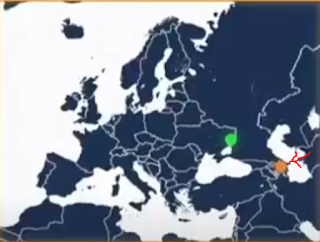 Clive had located it in Azerbaijan. He didn't win the point.
“He reads the news. It would be embarrassing”, teased Richard Osman, quipping, “Clive, you know what, Ukraine hasn't really been in the news recently, has it?”
Everyone laughed.
Posted by Craig at 07:02