I try shutting up for a change. 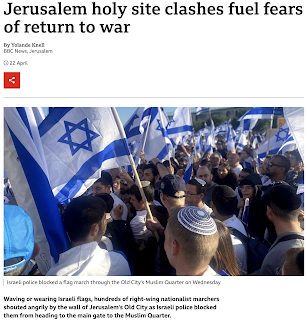 I began a new post about al-Aqsa the other day, beginning with “I really didn’t want to flood the blog with Israel-related posts.”  Then I wondered why I was apologising. Did I need a disclaimer? I imagined people saying “What?  Another piece about the al-Aqsa riots?” Anyway, it didn’t get written (but not because of 'not' flooding the blog.)

Later, and splish splash I was in the bath and idly reading the label on my flannel. (I often read labels) “100% cotton. Keep away from Fire”  I mean as if!  How likely is it that a small face-flannel would get too close to a fire, and how dangerous would it be if it did get so close that it caught alight (!) and burst into huge flames? It seemed absurd and reminded me of the legendary notice on a post in the in the middle of nowhere marked: “Do not throw stones at this notice” Not only absurd - but instigating a compelling desire you hadn’t thought of till you were forbidden to do so. (Quick! Get stones!)

That brought to mind those Palestinian juvenile delinquents desecrating their ‘third holiest place’, al-Aqsa, by breaking up significant archeological relics into stones and rocks to hurl at Jews who dared to place their filthy feet on the Muslims’ ‘holy’ ground.

Yolande Knell must have missed that bit of the story. Perhaps she came in half way through the first act and spent the rest of the performance baffled about what was going on. All she could see was Israeli police having another go at Palestinian worshippers. The BBC’s context-lite reporting of that and similar incidents differed from the Jewish press’s accounts of the same thing.

That’s so weird. I understood that the BBC was the most reliable news organisation in the world. I’ve written about violence at al-Aqsa at least once before. Years ago I think. It’s almost a ritual. No doubt the Beeb sees the annual desecration by Palestinian delinquents of their holiest spaces as old hat and low priority news-wise. Not really worthwhile going into it again and again.

Fresh trouble was reported briefly by Rebecca Jones during a BBC news bulletin earlier this week, but little or nothing else was to be found on the BBC website. The institutionally-hostile-to-Israel  Guardian mentioned it once but I think they got away with it.

I stumbled upon a Zoom conversation on Jewish News Syndicate (new to me.) The panel included Melanie Phillips, who made an interesting observation. She said that while her occasional appearances on the BBC (and her column in The Times of London) afford her a tremendous platform she feels that her ‘mainstream acceptability’ comes at a price - the tacit understanding that her Israel-related contributions keep to a minimum.

That’s how I’m feeling right now about flooding this blog. In other words, Israel-related articles can only be smuggled in up to and until you reach an indeterminate saturation point, and if you want to put ‘the case for the "other side"’ you may; a) bury your observations on sympathetic fora like Jewish News Syndicate, or; b) risk alienating the - let’s call them the righteous misinformed - by fighting un-winnable battles on the MSM.

Of course, you could always just write on your own relatively niche blog and hope for the best.

Should I wade in on matters I know I’m relatively ill-informed about? With my vacillating opinions and known unknowns? I don’t know a huge amount about Ukraine and I suspect I’m guided by my own flimsy, fleeting emotions rather than objectivity. If anything, flag-waving curbs my enthusiasm.

Who, apart from Rod Liddle, admires Angela Rayner’s feisty political acuity? Do I? Not sure, but don’t think so.

Do I know much about cake and wine in the work environment? No. The collapsing economy and/or imminent nuclear annihilation?  Not much. Can I opine with any credibility whatsoever? I think not. My advice to myself is: stick to what you know, and STFU about the stirred-up personal feelings that hang precariously on the shoogly peg of biased, one-sided reporting. I, for one,  should really shut up.

Maybe I could embroider that onto a label.