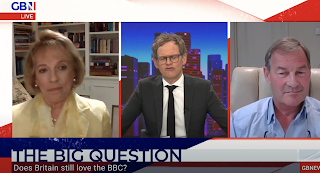 And now for something completely different.  It’s not about Israel. (well, only a tiny bit)

Insulting voters’ intelligence? I thought: am I the only one who was taken aback by the bullying here? (scroll to about 2:21.41)  It’s Nick Robinson taking advantage of his position in the concluding moments of this tetchy interview with George Eustice.

G.E. “In the interest of balance you need to recognise that the leader of the opposition…

N.R. (interrupting) “I don’t think we need any lectures from you about balance Mr Eustice, we interviewed Mr Starmer all about it yesterday”..

I did spot another reference to this exchange within a GB News feature titled: 'Does Britain still love the BBC?’  (scroll to about 6:20)   Dame Esther Rantzen (Supporting the Beeb) and Rupert Lowe (not so much,) discuss with Mark Dolan.

“I mean I listened to an interview the other day between Nick Robinson and George Eustice. I’m a farmer - George Eustice is not my favourite person but I couldn’t believe Nick R’s arrogance when he was interviewing GE and it’s an example of how they know they’re going to be there well beyond when that person they’re interviewing is going to be voted out of power so there is a degree of arrogance which I think is unacceptable now….”

Full disclosure; George is my M.P.   The  Eustice family farm produce is pretty pricey though. George has come in for such a lot of stick for his ‘let them eat cake’ remark, but it’s sound advice. (Shop at Lidl’s and Aldi) I don’t know if the Eustice family farm would agree.

So then I caught a programme on the radio late last night about  BLM.  on the theme of combatting racism. It was hosted by our old friend Samira Ahmed.  It came across as pretty vacuous, to be honest, but a couple of throw-away remarks suggested that the discussion was based on a somewhat creative interpretation of ‘anti-racism’.

One participant navigated his self-inflicted minefield of tricky glottal stops with such agility that something that would normally send my hackles through the roof was so distracting that it slipped by almost unnoticed. “…the way Israel has colonised Palestine” On reflection, I found that so profoundly dumb that it threw the whole of his tenuous anti-racist thesis down the toilet.

I concluded that their version of ”anti-racism” is itself pretty racist, especially when Samira Ahmed brought in Azeem Rafiq as an example, evidently having forgiven and forgotten his casual antisemitism or disregarded it altogether. That's what I call insulting listeners’ intelligence.