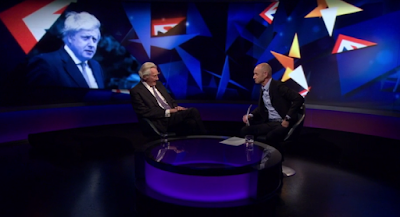 Good Grief! And after last night's Newsnight (see earlier tonight) we've now had Evan Davis and Lord Heseltine teaming up for this tonight:

Evan Davis: And this is why who want us to see exactly what Out looks like and then have a second referendum which chooses between In and Out again? Is that correct?

Lord Heseltine: I want something just a little different, but fundamentally so. I want to put Boris Johnson and his colleagues in charge of the negotiations. Now, he doesn't need to be the Prime Minister of the leader of the Conservative Party to do that but he got us into this mess and he got us into this mess on a range of platitudes about how glorious the future would be. Let him show us what that future is. My own view - it has to be shown - is that it will be totally unattractive to the majority of members of Parliament...

Evan Davis: Hence the second referendum in the...

Lord Heseltine: And so how do you carry out the will of the people in this referendum - which I believe you should. The only way is to negotiate so that the members of the House of Commons, where sovereignty lies, can come to a judgement about whether they will vote for it. My view is they won't. But they must be given the chance. And when it comes to it there are only two ways to do that: one is to have a general election; the other is to have a second referendum.

Lord Heseltine: Make sure the will of the people is seen to have momentum.

As well as that (and some Corbyn stuff), the rest of the post-EU referendum stuff on tonight's Newsnight consisted of:

(a) a Mark Urban report (including some ominous music) on how angry some EU politicians are about Brexit, especially about Nigel Farage and his "Nazi" campaigning - and about how others really want us to stay and think we will choose to stay, given time and an overturning of the referendum result.

(b) an interview with Marine le Pen, introduced thus (by Evan):

Not many political leaders in Europe have welcomed the British referendum result but one who did is Marine le Pen, the leader of the French Front National - the far-right party that commanded the support of about a quarter of French voters in the last election there.

and (c) an extraordinarily downbeat joint interview about the economic effects of the Leave vote, featuring Gillian Tett, formerly of the FT, finding very few silver linings, saying that banks have "clearly been very badly damaged" and are "now in the dust", that "interest rate expectations have collapsed in the last few days", that it's "a self-inflicted wound on an extraordinary scale", that there will be "years of soggy growth", that the financial sector has had "a heart attack", etc, etc, and ex-Barclays boss Antony Jenkins, sounding hardly any more positive!

"Let's just be clear about the potential for short-term financial contagion - the Lehmans Effect, all those kind of things. Antony, you're worried about the next six months, and getting through it", asked Evan, cheerfully.

And, to get us in the mood for all this doom and gloom, the start of tonight's Newsnight coverage of what Evan Davis called "our impending divorce" from the EU was accompanied by the Sex Pistol's Anarchy in the UK, including that famous ending viciously lingering on the word "Destroy!"