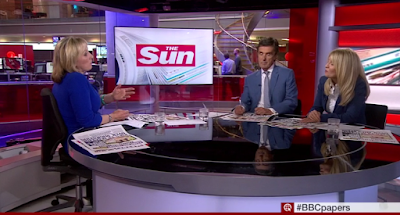 From Maxine to Martine (whose names often get mixed up by people on blogs!)...

BBC presenter Martine Croxall's opinions on the BBC News Channel's The Papers have caused concern here before - and suggested a pro-EU bias on her part. (Our archive on her can be found here). Finally, it appears she's gone too far - even for the BBC.

I first spotted that from a mysteriously brief entry on the BBC's Corrections and Clarifications page (whose link took you to another identically brief entry):

It then appeared in an article at Heat Street headlined BBC Presenter Caught Peddling EU myth. That presenter was Martine Croxall:

While hosting a newspaper review last night at 11.30 on the BBC News channel, Croxall challenged pro-Brexit supporter and former Tory MP Esther McVey over the number of laws imposed on the UK from Brussels.

McVey was trying to make the point that the EU has become dominant when it comes to legislation in the UK.

She said: “…Fifty per cent of the laws are now coming from Europe…”

But Croxall interrupted her, and lectured: “That’s not true, though, is it? That’s not true. Something like 2 per cent of our laws in this country are from the EU.”

Not only was Croxall standing uncomfortably near the impartiality line which BBC broadcasters must never cross, but she was also wrong.

Of course, the BBC only conceded the 'Inaccuracy' point. They didn't concede any 'Bias' point.

But I would urge you all to watch that edition of The Papers in its entirety. (It's not long). Martine Croxall's challenges towards Esther McVey went well beyond that one intervention. They were relentless and overly passionate. She comprised something of a tag-team with John Stapleton against the former Tory MP.

Yes, Miss McVey probably talked too much and some balancing points needed making for the sake of BBC balance, but I think Martine went seriously OTT here.

Purely incidentally, it looks as if Martine is going to have to amend her LinkedIn page. One of her 'current' roles looks if it might be ending very soon!: