Watching this “Room for thought” video, (which I see is three weeks old at the time of writing) reminded me of Rod Liddle’s article in the Spectator, written in 2006, in which he defends Boris Johnson by simply providing context to Boris’s infamous piccaninnies comment: ‘And so on to the next bunch of grinning piccaninnies.’

In this video he goes a little further, describing the Unicef reps that chauffeured  them around Uganda as a “couple of Swedish lesbians,” which leads me into another of Rod’s observations that came towards the end of the conversation, on the (infamous) Muslim protests against “gay education” that have been taking place outside a Birmingham primary school.
“On this one,” confesses Rod, “I’m with the Muslims” much to the bemusement of Carswell.

So what do we make of it?

I know what I make of it, but this is a blog post, not a doctoral thesis, so I’ll leave it there.

Another interesting point I have to add (well, I’m not compelled to by law, but I feel obliged to do so) Is that Rod clearly states that although the BBC is clearly biased to the left, it cannot be accused of supporting Jeremy Corbyn. This is true.

Much as I might prefer it if the Corbyn/Milne/ McDonnell axis were not given any air time at all, I do realise that to insist on such a thing would be even madder than demanding the BBC no-platforms anyone to the right of the aforementioned trio. However, there are people who think that is a perfectly reasonable demand. For example, the ones who get all irate at the very appearance on TV of anyone not openly hostile to Israel.

When David Keighley launched his crowd-funded legal challenge to the Beeb, which I understand is based on the BBC’s weak methodology (particularly with regard to anti-Brexit bias) several donors commented that the bias they found most troubling was the BBC’s bias against Jeremy Corbyn.

It is interesting (to me) that BBCWatch, which focuses on the factual omissions and inaccuracies within the BBC’s coverage of Israel and the Palestinians, continually offers specific examples to illustrate the BBC breaching its own editorial guidelines. In other words, BBCWatch bases its critiques on objective analyses, albeit from a subjective (pro-Israel) angle.

Here is an example of the opposite camp attempting to use the BBC’s editorial guidelines to underpin its (pro-Corbyn) angle. An outfit called Media Reform Coalition attempts to debunk the BBC’s Panorama Programme on antisemitism in the Labour Party by pitting specific quotes from the editorial guidelines on impartiality and accuracy against examples they have selected from the programme. I'm not so sure it stands up to scrutiny, but what do you make of it?

Note to self. This is a blog post, not a novel, so I’ll leave it there. 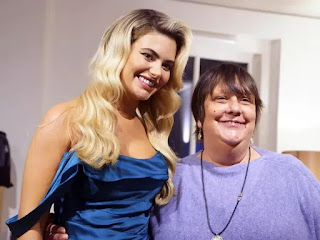 Did anyone else watch the first two of Kathy Burke’s C4 films, ‘All Women’?

It wasn’t on the BBC of course, but I’ve been scouring the reviews to see what the rest of the world made of them.

On the theme of luvvies morphing from actor to opinionista, this was quite high on a scale of validity (in terms of the actual justification of going ahead with the project) as opposed to certain other actor or actresses political advocacy for want of any better examples.

Kathy Burke had a genuinely enquiring approach to the topics she chose to feature. The ‘appearance’ episode was entertaining, although the relative superficiality of the film’s treatment of that particular topic was equal to the obvious superficiality of the topic itself. Especially as it was made-for-TV, a medium that virtually depends on physical appearance for its continuing existence - particularly where wimmin are concerned.

Do I make myself clear? It’s blindingly obvious to state that beauty is only skin deep, but it’s also quite trite, and coming from someone who describes her own appearance in the appropriately derogatory terms, well, she would say that, would she not?

I think Ms Burke is - was -  a terrific comic actress. her “Perry” to Enfield’s Kevin was brilliant especially in the ‘our kid’ from Manchester episode, and her Waynetta was a delight.

But the defiant stuff about her chin had a hollow ring and when you saw her waddling along you couldn’t help thinking that she could have done with losing a few tons in the name of longevity if nothing else.

I wonder how many ‘fucks’ they needed to convey “edgy”? Or defiance and rebelliousness? Billy Connolly put me off the gratuitous ‘fuck’ when he got lazy with the jokes and liberal with the expletives. Not that I mind hearing the odd ‘fuck’ blurted out especially at times when it seems so much more expressive than any other swearword could possibly be. Sorry, but the swearing here was actually tedious and didn’t enhance Kathy’s image for me.

The motherhood thing was interesting. I imagine there was something deeply psychological in Kathy’s decision to not have children - because she seemed quite fond of children and even actual babies.

As a mother (which Andrea Leadsom once said, famously scuppering her hopes of ever becoming Prime Minister) I think not having children allows you to remain ‘as selfish as an average infant’ your whole life through. It’s hard to be quite as selfish ‘as a mother’ as you were before yer kids came along. I think the current trend favours selfishness (in women.) Is that a good or a bad thing?
Utter selfishness is quite unattractive, but so is in-yer-face-selflessness.