The giant rusty key and other stories 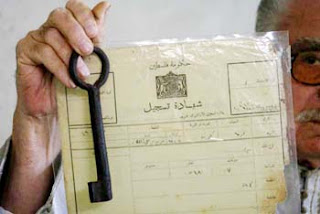 I’ve been thinking about this for a while now. I haven’t written about it for two main reasons.

One, it would have made me look meaner and even more of a fanatical polemicist that I already do, and two, the subject is more nuanced, subjective and infused with a good deal more shades of grey than the traditional fifty. It’s also firmly embedded in emotional and a-historical folk-weavery than I can ever presume to tackle alone.

This is not the first time that we’ve featured this author here. The ITBB search engine reveals that he is no stranger to a particular brand of sentimental Palestinian folklore; saccharine, emotional heartstring-tugging - the Disneyfied narrative of the Palestinian Nakba and the complete absence within that narrative of accountability for their own ‘plight’.

Realistically I have to accept that something of this is entrenched in the national psyche, but what I find incomprehensible is the way that swathes of intelligent people have swallowed it whole - hook, line and giant rusty key.

‘It’s not just me saying it’ as every political advocate currently says to bolster whatever case they’re advocating. BBC Watch addresses the matter with the gusto and rigour that I cannot adequately muster. Shehadeh’s memoir popped up on Radio 4’s Sunday Morning with…(Scottish edition)

“Raja Shehadeh and Penny Johnson live in Ramallah in the occupied West Bank. They’re both writers and campaign for Palestinian civil and political rights. They talk to Sally about their writing and their life together.” Shehadeh’s allegations of ‘land grabs’ and “building more and more settlements” – along with a subsequent claim that Israel makes “attempts at making [Palestinian] people leave” – are patently false.

Magnusson however again failed to make any effort whatsoever to challenge those blatant falsehoods and closed the item shortly afterwards with yet another misleading reference to “fifty years of occupation”.

It may be the Scottish version, but it’s still the BBC. So what else can we expect?

This has something to do with the way the BBC has started to use ‘inclusive’ language to make  Islamic culture as cosy and familiar as our own. The throw-away term “Friday Prayers’ is now used as fondly as “Sunday Lunch” and the term ‘Eid’ has become Eid al-Adha’ and we are confronted by BBC anchors like Jane Hill using the full-on Arabic pronunciation. Mona Siddiqui’s TFTD hammered the nail home firmly on this morning's Today Programme. (1:46:53)

But worse. Perhaps in the same spirit in which the Spectator brought in Julie Bindel to counteract Melanie McDonagh’s critique of Lauren Laverne’s approach to Desert Island Discs  - presumably “for balance” - our last remaining refuge from creeping left-wing journalism has published a glowing review of Shehadeh’s latest work of fiction.

Going Home: A Walk Through Fifty Years of Occupation

On a rainy day in 1955, four-year-old Raja Shehadeh left school without putting his coat on. ‘I will soon be home, I thought, trailing the coat as it became heavy with rain.’ The walk was longer than he expected, or the rain heavier. He arrived back soaked through and fell ill with pneumonia. The journey home, without protection from the weather, could have killed him.

Should have put his coat on then?

Throughout his life in Palestine, Shehadeh has been buffeted by events that have seemed as uncontrollable as the weather. He was a very young child when his family were forced out of Jaffa by Israeli soldiers and moved to Ramallah, and 16 during the Israeli invasion of the city.

For nearly 30 years, Shehadeh — a lawyer, activist and writer — has taken a walk every year on the anniversary of the 1967 war and occupation of Palestine by Israel. The year of this book is 2017 —the 50th anniversary — and Shehadeh is 66, plagued by a recurring dream in which he is lost and can’t find his home.

Has he forgotten who started the ’67 war “and occupation of Palestine”? which by the way, was an intended war of annihilation.

Thankfully the below the line comments restore a modicum of common sense.

avi15 • 4 days ago • edited
This article is the usual drivel. It gives the same misleading impression as the eastern European lady in my local high street, who sits on the pavement looking all pathetic and begging; and then, when she thinks no-one is looking she nips into the post office to send all her winnings back to eastern Europe and at the end of the day, she jumps into a not that old Toyota Auris parked round the corner.

Do we really have to fall for all of this guff? There are a million reasons why houses are demolished: normally, it has to do with not bothering with things like planning permission. If the Palestinian leaders wanted to make a deal and sort out their dispute with Israel, they easily could - they just don't want to. They're clearly making far too much money begging, looking all pathetic and hoping that one day the world will let them grab all of Israel and kill or expel all of its Jewish inhabitants.

Don't fall for this rubbish - which only serves to perpetuate the rule of fascist, anti-Semitic criminals - which is what both Palestinian regimes currently amount to.

And by the way, no-one "stole the Palestinians' land'. That's another lie they repeat to anyone gullible enough to listen, but which is used to justify any and every crime of violence, however heinous, that they commit.

This whole topic is one big confidence trick. A scam, really. It’s like that ad for equity release that features the most annoying elderly couple in the whole wide world saying “this nice young man has offered us twopence ha’penny for our house, so we took it straight away.”

Or, the most mind-boggling example of human gullibility on the planet in which the police took the testimony of that palpably raving psychopath and transparently delusional man Beech and used it to vilify and destroy people who found themselves defenceless and broken in the most Kafkaesque way imaginable.