For the sake of diversity

There is quite enough already online about the Trevor Phillips fiasco - not so much the above quote from Sayeeda Warsi’s Twitter thread  - I was thinking more about the negative observations about the Labour Party's suspension of Trevor Phillips below articles about the topic in The Times.

Islamophobia? Looks bad for the Labour Party? With my reputation (!)

"It would be a bit odd if I suddenly decided that because I had been kicked out of the club I couldn't express my beliefs."


Instead of going over all that again, I want to pick up Nick Robinson mentioning “A letter from Tommy Robinson that was found in Darren Osborne’s van, referring to Muslims as ‘a nation within a nation.”

Oddly, the above clip from the BBC Politics Twitter timeline excludes that particular reference. That set me thinking. Was there really such a letter? Or was it another of those disingenuous memes? You know, like letterboxes and watermelon smiles.
I found two or three reports in the Independent referring to: “letters beginning with the phrase “dear Darren” ... “signed off” by Tommy Robinson." This, and this written by Lizzie Dearden, a reporter who has ‘history’ with T. Robinson. 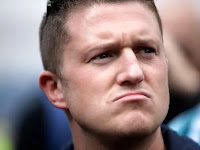 This report, illustrated with a suitably aggressive-looking shot of her ‘subject’, refers to ‘emails’ that Osborne had downloaded, and later to an “email from Mr Robinson to Mr Osborne”. So, had Tommy Robinson been personally corresponding with Osborne and specifically inciting him to ‘act’?

We all know that ‘clicking’ on something can trigger a flurry of unsolicited ‘personal’ messages, or let’s call them personalised messages, and we should also understand that receiving an automatically generated round-robin is not quite the same thing as being actual pen-pals with an individual at the head of the organisation that generated it.

So why did Lizzie Dearden and co make it seem otherwise? ‘Signed off’ is slightly different from just ‘signed by.” The Independent's journalists must have been aware that they were giving the impression that Tommy Robinson was specifically inciting Osborne to kill Muslims.

Nick Robinson said (to Trevor Phillips) that inflammatory messages from Tommy Robinson were ‘in a letter found in his (Darren Osborne’s) van’, and I put it to you that there was indeed a letter, but it was written by Osborne himself. There is even a photo of him sitting in a pub, pen and paper in hand - allegedly setting out his ‘manifesto’. It’s in the actual BBC report. Finsbury Park: what led Darren Osborne to kill? (Dominic Casciani)

Personal correspondence, generic emails, incitements to kill, self-penned manifestos - easily conflated, if you've a mind to, and you know it will pass unchallenged. 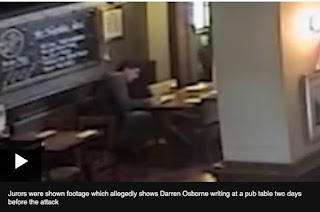 There is a considerable dollop of irony in the fact that in all the reports, even the ones that have massaged the facts to suit their agendas, a large portion of the blame for triggering the unhinged Mr Osborne to carry out his nasty deed has been laid at the door of the BBC’s own dramatisation “Three Girls.”

But Nick forgot to mention that. It might have been awkward because it would have drawn attention to an uncomfortable truth about the "negative characteristics" of certain individuals. Or, to echo a certain Naz Shah (did she really say that?) you need to shut your mouth for the sake of diversity.

Update:
In this post (about the Robinson bros.) I was more concerned with the way Nick Robinson managed to shoehorn Tommy Robinson into his attack on Trevor Phillips than on the substance of the Labour Party’s ridiculous attempt to save its reputation. (As if!!) and I wanted to highlight the annoying phenomena of memes that have gone viral despite being disingenuous and context-lite.

The topic of Trevor Phillips and Islamophobia has been examined from every angle, inside, outside and upside down by The Times, the Spectator, Spiked and I daresay the Guardian and the Independent too. All the arguments have been made so eloquently and articulately by others that it seemed presumptuous for me to try to go over it all again, again.

I would have posted this update below the line (in a comment,) but it's easier to embed the links to some of these excellent pieces here. There are some good responses. (Unfortunately, the Spectator pieces are behind a paywall.)

In defence of Trevor Phillips

Trevor Phillips’s fate should terrify us all

Labour will regret its shameful treatment of Trevor Phillips


Here is a rudimentary list of some of the arguments one hears and reads, which one must put to oneself to test their strength and /or validity.

1.) A phobia is an irrational fear.
2.) The ‘good Muslim’  is an ex-Muslim.
3) A ‘good’ Jew is an anti-Zionist Marxist
4.) Your ‘race’ is your race is your race. (Said Goebbels)
5.) Islam is a political ideology masquerading as a religion.
6.) Lumping disparate things together is racist.
7.) Arabs are 'Semitic' too.  (Gnomes are humans too) (Don’t be silly)

One can get lost in contradictory arguments about Islamophobia and antisemitism plus the concomitant false equivalences. The themes go round and round and trip over themselves on the way back. These days, in the end, it all boils down to ‘feelings’. Points mean prizes; facts mean feelings.