Who's the biggest liar?

We’re supposed to be talking about the BBC but I think Sky surpassed the BBC (and itself) on today's bias Olympics.
After Dominic Cummings’s press briefing/ debriefing Alastair Campbell was given free rein (uninterrupted) to spout utter bile. 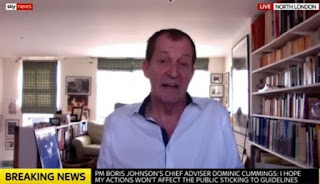 "Campbell described Cummings’ statement as a “car crash” and said that it is “beyond belief” they are focused more on media reaction to Cummings than the coronavirus pandemic.

Hang on. Surely it’s the media that’s focused more on Cummings than on the coronavirus pandemic!

He explained: “Whether he was in breach of the lockdown rules, I don’t have any doubt about that whatsoever.
“And I think it is clear from the tone and tenor of all of the other questions, and I think they were reflecting... what viewers are thinking about the utter hypocrisy at the heart of this.

Hang on. I think some viewers might actually be thinking about the utter hypocrisy at the heart of the media?

“The other thing that is beyond belief here is that we are in the middle of crisis. The prime minister and the cabinet, their full attention should be on how to get us through this crisis, which they’ve handled so badly from start to finish.

Hang on, surely it’s the media that’s interfering with everyone’s attention on how to get us through this crisis?

“But they were all, all afternoon, sitting at their television looking at their Twitter feeds trying to work out what the right-wing media are saying.

The rest of Campbell's rant was plain nasty and doesn’t merit being broadcast at all.

“They are the most pathetic, craven bunch of people, and they do not deserve to be there.
“I am moving to the place where I sort of hope he stays, because they’re all done now for this if they’re not careful.
“So I don’t care what Johnson does, he’s been exposed for what he is, he’s a liar and a charlatan, and not up to the job.
“Cummings - you’ve seen what he is today.
He added: “I find it shameful that this is our government at this time of crisis. I find it utterly shameful.”

Whether or not Cummings believed he broke the guidelines (he did) he’s muddied the public health message and is distracting from the govt’s pandemic response. The only honourable thing to do would have been to apologise & resign. pic.twitter.com/UBvJwbsfjx
— Sonia Sodha (@soniasodha) May 25, 2020


I mean——- just——- - - does this animated spitting-image-like portrayal of indignation really reflect public opinion? She complains that Cummings has been occupying the news agenda for the last three days and has "distracted the machinery of government from the most pressing issues". Well, whose fault is that madam? I think you'll find it's yours.
On the other hand: (Brendan O'Neill - Spectator /Facebook)

“The media’s Dominic Cummings story has completely collapsed. He did NOT go to Durham a second time, which was reported on the front page of the Sunday Mirror and the Observer. He did NOT have any physical contact with family members. The police did NOT talk to the Cummings family about the Covid lockdown guidelines. Cummings did NOT carry on doing things that everyone else had stopped doing — he even missed the funeral of his uncle who died from Covid. He did NOT leave his London home for leisure reasons — he left it because he was receiving death threats as a result of media demonisation. He was very ill, his wife was ill, and at one point his child was taken to hospital in an ambulance in Durham.
His family has had a really rough time and the media have told lie after lie about him. The scandal is not Cummings’ behaviour — it is the collapse of ethics and objectivity in the British media.

So who’s the biggest liar? Cummings or the media?
I didn’t think Dominic Cummings had a pair of completely water-tight legs to stand on, but looking at the way the media has inflated this increasingly irrelevant tale to bursting point, I think I’ll go with Brendan.
Posted by sue at 22:08