It looks as some Newsnight journalists aren't happy with the BBC's ruling:

Lewis Goodall will have to be very careful. He's skating on thin ice now and publicly expressing dissent in this way could have consequences. The BBC's director of news Fran Unsworth wrote last year (in an email to staff):

We all have personal views, but it is part of our role with the BBC to keep those views private. Our editorial guidelines say BBC staff must not advocate any particular position on a matter of public policy, political or industrial controversy, or any other ‘controversial subject’. That applies to all comments in the public domain, including on social media. There is no real distinction between personal and official social media accounts.

Update: Others are now noticing Lewis Goodall's risky 'like':

Darren Grimes: BBC Newsnight’s Lewis Goodall agrees that it’s spineless of the BBC to admit that last night’s monologue wasn’t impartial. It wasn’t. It’s baffling to me that these entitled journalists think they can collect taxpayer funds and use it to present their left-wing opinions as facts.

Rich: If you worked for a private company, what would happen to you if - after having a stern talking to for breaking the rules - you went onto social media and started liking posts criticising management? 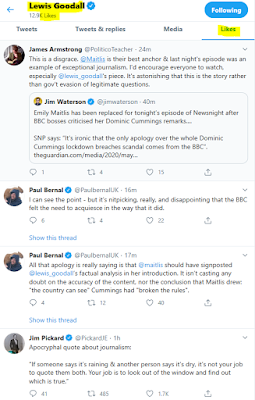 These include:
Be careful, Lewis. Be very careful.
Posted by Craig at 17:31