A chat about Any Questions, Chris Mason & Peter Hitchens 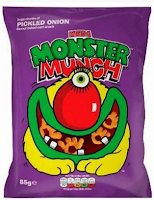 For those who listened to Any Questions on Radio 4 last night (or are about to do so again when it's repeated shortly), here's a little Twitter chat about it.

It's a rather civilised one by the standards of Twitter, and I think that fair points were made all round.

Chris Mason is a great improvement on Jonathan Dimbleby. I think he'd also make a great replacement for Anita Anand on Any Answers - though, alas, I don't think my prayers will be answered on that front.

Moreover, I do hope that the Monster Munch story below is true. I rather like pickle onion-flavoured Monster Munches, and haven't had one for aeons. I think I would have gratefully accepted Chris's kind offer.

Ron Swanson: Might actually be worth listening to Any Questions tonight. The BBC have, reluctantly I’m sure, invited Peter Hitchens on.
Chris Mason (to Ron Swanson), retweeted by Peter Hitchens): Thanks for listening. We don’t invite anyone onto the programme reluctantly. Peter is a brilliant debater and I’d love to have him back soon.
Ron Swanson (to Chris Mason): Chris, I don’t want a row with you, and this isn’t even aimed at you or Any Questions which has people from all views on. My issue is with the BBC in general. Have a good day.
Mike Wilson: Peter always gives his honest opinion with no flannel, you don’t have to agree with him to see he’s genuine, which is a breath of fresh air these days.
Ron Swanson: Chris is much better than Dimblebot too, IMHO. He actually lets people talk and doesn’t constantly interrupt. A good appointment. Thumbs up. As for Peter, I don’t always agree - which is good! I don’t want to always agree with someone. How boring. But what he says he believes. Rare.
Sir Radfoot Strongdoctor: I once encountered Mr Mason in a long queue at a post office in Hounslow. He was eating noisily on a packet of pickled onion flavoured Monster Munch. On catching my gaze he offered the packet to me and invited me to take one. I politely refused. "Suit y'self" he said.
Robert Miller (to Chris Mason): You gave him a fair hearing too. More than some other programmes did.