And the result is? 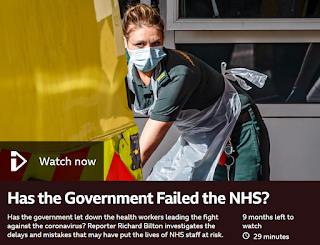 You will doubtless recall the furore over the Panorama edition titled 'Has The Government Failed The NHS?'.

Guido Fawkes led the charge against the BBC for featuring six left-wingers, most with links to the Corbyn end of the Labour Party, three of whom directly criticised the Government for its handling of Covid-19.

Newspapers took up the charge too.

Well, large numbers of complaints went in and the BBC's Executive Complaints Unit (ECU) gave its ruling this week.


Now it has to be said that hhe Daily Mail headline yesterday, BBC admits Panorama DID breach its editorial standards by failing to reveal doctor who attacked government over PPE was long-time Labour member, promised more than it delivered.

Yes, the BBC's Executive Complaints Unit (ECU) ruled that "the nature and extent" of former Labour election candidate Dr Sonia Adesara's political affiliation "was such that it might have been relevant to the audience's evaluation of her contribution insofar as it was critical of the Government, and that it was a breach of the BBC's editorial standards not to have given viewers appropriate information about it", but it caveated that by saying, "her criticism of the Government was in keeping with what might be expected from a doctor with experience of inadequate PPE provision, and that information about her political affiliations would not have called the validity of her concerns into doubt in the minds of viewers."

And the rest of the ruling clears the programme of all the other charges, pronouncing it innocent over the presentation of and the participation of all the other five people featured in it - including Brian Eno's daughter and Professor John Ashton.

So in the scheme of things it's the merest crumb of an 'admission' and unlikely to satisfy the programme's many critics, but at least, as the Mail says, the ECU ruled that the programme did breach BBC editorial standards, and that's something I suppose.
Posted by Craig at 13:30