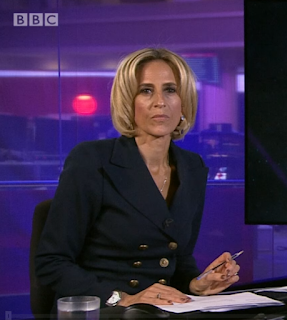 So Emily Maitlis says she got a supportive text from Dominic Cummings after the BBC criticised her for breaching BBC editorial guidelines with her controversial Dom-and-Boris-bashing Newsnight monologue.
Now, if all's as Emily tells it, that's definitely quite something: It's astonishing that DC sent it. And it's almost as astonishing that EM kept quiet about it for a few weeks and then dropped it into a Tatler interview.
That he evidently had her phone number initially surprised me - for all of two seconds. Of course he had it!
Emily's choice of phrase to describe Dom's text was 'peak surreal' - a 'peak metropolitan elite' way of putting it, you might think!
So what were they both up to here?
Posted by Craig at 07:43