A Spike in representation?

It's a funny old world.
In years gone by Sue and I would share our astonishment at Spiked's unwillingness to say a bad word about the BBC.
Yes, they might sharply attack the mainstream media in general from time to time, but the BBC - for some reason - seemed off limits.
I always put that down to Spiked people being regularly invited onto BBC programmes - as, indeed, they were.
But Spiked, praise be!, has seriously fallen out of love with the BBC in recent months and joined the ranks of the anti-BBC partisans.
It’s time to defund the BBC is one of their latest headlines and Calvin Robinson's piece is one of those pieces Sue might have had in mind when she says that posts like ours are becoming so widespread as to pretty much render us surplus to requirements.
I could have written much of it myself, and rather wish I had,
Indeed, one bit echoes an aborted post I did sketch out on 23 June but didn't publish.
But I'll publish it now, for what it's worth.
It came after the departing Lord Hall announced another £100K of the licence fee would be spent on "increasing diversity on TV":

But I think the thing that might strike most members of the public on reading this is that the BBC's new commitment is absurd and flies in the face of what they actually see - the evidence of their own eyes (or, if you listen to Radio 4, ears).
Just look at the question of representation:
There's no need for the BBC to commit itself to ramping up BAME representation because BAME people aren't under-represented on screen.
If anything, BAME people are significantly over-represented on screen.
The extent of this is fully revealed if you look at the Diamond reports of the Creative Diversity Network, which monitors the kind of diversity the BBC is talking about on the five main UK broadcasters from a position of advocating for increased diversity of the BBC variety.
Its findings (from 2019) confirm the impression many people hereabouts have instinctively felt - that if you tune into BBC TV, you'll see more BAME people than you'd expect to see if you think in terms of the population: 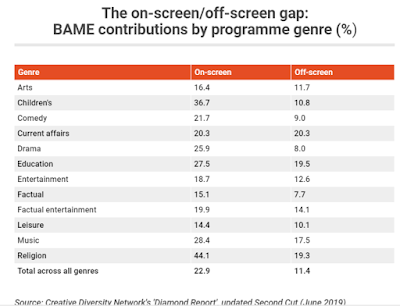 The BAME population of the UK is now around 15%, so - as these figures show -  BAME people are actually over-represented on broadcasters like the BBC in almost every area.
The figures for children's programmes and religious programmes are especially unsurprising: 36.7% for children's programmes and 44.1% for programmes about religion.
So the BBC doesn't need to chuck £100m at making BAME people even more over-represented.
Dig a little further into those Creative Diversity Network findings and you find that people over the age of 50 are the ones most under-represented on screen, and that men fare worse than women.
The obvious conclusion is that the BBC needs a lot more non-BAME, over-50 men on screen to better represent the population.
Posted by Craig at 19:40