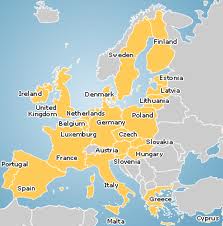 This isn't really a topical blog but I'd like to make a few observations on a programme that will be broadcast on BBC Radio 4 this evening. It's Allan Little's latest BBC documentary on the European Union, Europe Moves East.

It sounds rather as if it will be a follow-up to his major Radio 4 series from earlier this year, Europe's Choice . This (you may or may not remember) was the subject of a post of mine from a couple of weeks ago where I argued that despite taking on a hot political subject - the history of the euro - the programme featured not one single British Eurosceptic (despite there being several attacks on British Eurosceptics in the course of the series) on any of its three episodes; instead, it piled on pro-EU enthusiast after pro-EU enthusiast (several of them from Britain). Only in the third and final episode did a Eurosceptic voice (from Finland) make an appearance, and his remarks were undermined by Allan Little's commentary.  The central thesis of Europe's Choice was that the euro crisis had been caused by too little EU intervention, due to Germany not wanting to throw its weight around enough – a highly Europhile contention. At the end of that post I anticipated this new documentary, wondering what it would be like.

Well, we've already had a foretaste of tonight's broadcast. The BBC News website is prominently featuring an article based on the programme, written by Allan Little himself.

My alarm bells are already ringing. The range of commentators looks as if it will include many of the same cast-list of strong pro-Europeans as appeared last time round - ranging from John, Lord Kerr to Joachim Bitterlich, Helmut Kohl’s advisor; from Dietrich von Kyaw, the former German ambassador, to Poland's Foreign Minister Radoslaw Sikorski. The online article is also unremitting in its presentation of "the EU as liberator", securing the former Soviet Bloc nations into the democratic European family. John, Lord Kerr is saying that the Eurosceptic Brits got it wrong. Mr. Sikorski is calling for Germany to lead in Europe and for more EU intervention.  Dietrich von Kyaw is emotionally wedded to the European Union. And a young Pole is quoted endorsing their pro-EU sentiments too:

Generally, Central Europeans do not feel they have merely joined the European Union, they feel they have fulfilled a destiny disrupted by war. It is a sentiment echoed by the young.

However, it's too soon to say. The programme hasn't even been broadcast yet. This article is obviously only a brief (if biased) taster for the full 40-minute long radio programme. Hopefully that will present a fuller, more rounded picture.

Here are some tests for Europe Moves East in advance, all of which it ought to pass if its reporting is to be seen as impartial:

- That is should feature some British Eurosceptics to balance John, Lord Kerr. It shouldn't just be another diet of pro-EU enthusiasts such as Timothy Garton Ash, Sir Stephen Wall and Douglas Hurd. If Allan fails to include any such voices (or massively weights his choice of voices in one direction) he can be judged to have failed to give an important voice in the argument a proper hearing - thus failing the BBC's own guidelines for impartiality. If he does include some (and I'm fearing he won't), he should not seek to undermine their arguments in his surrounding commentary - especially if he doesn't also seek to undermine the arguments of his pro-Europeans talking heads as well.

- That it must feature some Polish Eurosceptics to balance the EU enthusiast Radoslaw Sikorski and "26-year-old Mateusz Koracki", the pro-EU Polish youth. It's no good Allan Little painting a picture of a Poland that is wildly enthusiastic about the EU. Poland has been one of the keenest pro-EU countries of the last decade, but the main opposition party in Poland is now firmly Eurosceptic and it's leader, Jarosław Kaczynski, said of Mr. Sikorski, "That man had no right to offer Germany leadership in the European Union." There are other anti-EU parties in Poland too,  such as the League of Polish Families, and other powerful voices against - such as Father Tadeusz Rydzyk, the head of the Catholic radio station Radio Maryja. We must hear at some length from their side of the Polish argument too. If we don't, something will be very amiss about this documentary.

- That it should balance its coverage of broadly pro-EU Poland with coverage from the more Eurosceptic Czech Republic. An interview with the Eurosceptic Czech president Václav Klaus - a fine speaker of English and usually happy to be interviewed by British news organisations! - or with Jan Zahradil, head of the the European Conservatives and Reformists group in the European parliament (which also includes the UK Conservative Party), is surely a must. Mr. Zahradil's position is particularly interesting. The Czechs have had a traumatic history, just like their Polish neighbours. Why is Euroscepticism strong there? Will Allan Little tell us? If Europe Moves East fails to get to grips with Czech Euroscepticism then I will be suspecting bias.

- That any mention of pro-EU enthusiasm in the Baltic States should also mention the strength of Euroscepticism in Latvia. Only 38% of Latvians believe that EU membership has benefited their, according to the European Commission.

- That the strength of Euroscepticism in Hungary should also be discussed. With the UK and Latvia, Hungary is the country whose people supports EU membership the least. According to the European Commission itself in 2009, a survey asking whether citizens feel that their country has benefited from EU membership found that only 36% of Hungarians thought it had (compared to 34% in the UK). If Hungarian anti-EU sentiment is mentioned will Allan Little present it in all its depth and breadth? (Incidentally, that same Commission report found that even Bulgaria (with 48% approval) was also in the "less than half the citizens believe EU membership has benefited their country" category. Will Allan Little's documentary reflect that too?) The strength of Euroscepticism in Hungary is something that Europe Moves East would be highly remiss not to cover. So will it cover it?

- That Euroscepticism in Eastern Europe shouldn't be tied disingenuously to the far-Right. (Most of the far-Right is Eurosceptic and far-Right parties are gaining ground there). That would be a smear and proof of bias. (64% of Hungarians don't all support Jobbik!)

So, the programme shouldn't be seen to be pro-EU. It shouldn't feature as 'talking heads' merely the same old bunch of pro-Europeans from Britain and Europe as featured in Europe's Choice. It must feature a fair smattering of Eurosceptic 'talking heads' from both Britain and Eastern Europe. It should seek to reflect the depth of Euroscepticism as well as pro-European popular and elite sentiment in several of the recently acceded former Soviet Bloc countries. It shouldn't cast the British Conservatives as being on the wrong side of history without also inviting a 'talking head' to defend the British Conservatives' interpretation of events. It shouldn't be full of grandiloquent gush about the liberating effects of the European Union, without plenty of voices to cast cold water on that point of view.

These are very reasonable demands, I think.

If you haven't got anything better to do, why not give the programme a listen tonight (8.00pm, GMT)? Let's see if Allan Little can confound all my fears. If he does, I will be giving him full credit shortly after.

Allan Little has also drawn on some of the same stories found in the online article for a new For Our Own Correspondent piece. His FOOC talk is an emotionally-charged piece that draws again on the experiences of Dietrich von Kyaw, the former German ambassador, to Poland, who has painful memories of Germany and Poland's past and who worked on Poland's accession to the European Union, and then draws a direct line between between those experiences and the hopes for peace embodied (in his his way of thinking) by the EU of young Mateusz Koracki, the Polish tour guide. Allan Little powerfully fuses their horror of past conflicts with their gratitude towards the European Union for bringing peace, presenting their shared point of view to the listener and amplifying it with supportive details from history. Does their argument in favour of the EU become his argument in favour of the EU, given that he doesn't seek at any time to add any authorial words of caution or caveat to their perspectives, merely to project the force of them to maximum effect? (Some uncharitable types might call this 'great pro-EU propaganda').

What raised my hackles here was the introduction to the piece from presenter Pascale Harter. Does this introduction not sound as if Allan Little's piece is meant as an official BBC riposte to all those Eurosceptic types who blasted the award of the Nobel Peace Prize to the European Union? (It's best heard to catch Pascale's changing tones of voice, but this transcription should convey a little bit of it):


"The European Union came in for quite a bit of stick recently when it accepted the Nobel Peace Prize. "What achievement!", cried the critics. "The economic crisis has put the whole project in peril!" But is that view shared across the Union or do the more recent members in the East, like Poland, feel differently? Allan Little has met people whose perspective is coloured by a memory of Europe past."

My second thoughts on hearing Allan Little's piece were that it was an argument in favour of awarding the Nobel Peace Prize to the European Union. It may or may not have been deliberately meant as such, but listeners surely cannot have heard it any other way. If you bring up a controversial topic - the question of whether or not the EU should have been awarded the Nobel Peace Prize - and then present a report that gives just one perspective - the shared views of two people (one German, one Polish) who invest their hopes for peace in the EU and credit the EU for bringing and guaranteeing that peace - then you have presented an argument for just one side of that controversy. That much is obvious. Does that mean that the report itself - and, thus, the reporter and the BBC - also answers the Peace Prize question with a "Yes"? Well, obviously not directly. The BBC would probably argue that Allan Little is merely presenting a perspective we in Britain don't hear very often and isn't endorsing it. That he presents it without demur and by amplifying its emotional force might also be defended by the BBC as being what a good reporter who hopes to raise questions in the listener's mind ought to do. That's much more debatable, especially in the context of Pascale Hunter's introduction. If conceded, the problem would then only arise in programmes like FOOC didn't then balance this with other reports which give the anti-EU side of the argument with equal power and also without demur. Have they ever done so?

None of this is allaying my suspicions that tonight's documentary from Allan Little is going to be as restricted in its range of views as the online article and that FOOC report and that it is going to present a pro-EU message with all the communicative force that its presenter can muster whilst downplaying the strong pools of Euroscepticism across parts of Eastern Europe.
Posted by Craig at 10:55