Who got it right - Migration Watch or the BBC?

BBC Home affairs correspondent Dominic Casciani has an analysis of the demographic changes to the United Kingdom over the last ten years on the BBC News website. It comes in the wake of the latest census results, as revealed today by the ONS:

What the census shows beyond any doubt is that the UK is in the midst of an astonishing era of demographic shift - and like the experience of many of its international peers, it is being driven by globalisation.

Ten years ago, there were some 4.3 million people in the UK who told the census that they had been born abroad. Almost all areas had been touched by changes from immigration - although in some areas the numbers were so small that it clearly amounted to little more than a family moving in or out - the phenomenon of a single Indian restaurant in a village, for instance.

In 2011, there were 7.5 million people born abroad living in England and Wales - up almost three million and taking their proportion of the population to 13%.

The UK is experiencing such rapid flows and movements of people from so many parts of the world, that parts of it can lay claim to being "super-diverse" - the idea that an area is home to so many people it's almost impossible to describe it in simple terms, such as home to one community or another.

The BBC has repeatedly been charged with playing down the extent of the wave of immigration that broke on Britain's shores during the years of the New Labour government and of being an advocate for large-scale immigration throughout that period.

A small part of the truth of that was admitted just over a year ago by the last-but-one Director General of the BBC, Mark Thompson:

"For example, I think there were some years when the BBC, like the rest of the UK media, was very reticent about talking about immigration. There was an anxiety whether or not you might be playing into a political agenda if you did items about immigration."

As an instance, though, of just how bad BBC reporting could be on the subject ten years ago, here's another piece by Dominic Casciani: 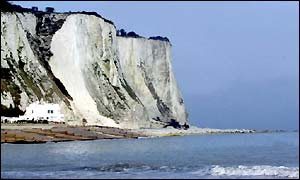 The white cliffs of Dover: Destination UK
What are the facts about immigration? BBC News Online looks at the current debate.

Figures from Migration Watch UK, a new group led by a former diplomat and an Oxford University demographer, predict more than two million people will arrive in the UK every 10 years for the foreseeable future.
Not surprisingly, the figures have dominated headlines amid the continuing debate over asylum, immigration and race relations in the UK.
According to the government's own figures, the UK has the "third largest foreign population and labour force in the European Union", around 2.2m people.
No one disputes that immigration to the UK has been increasing since the late 1990s. The problem is it's almost impossible to agree by how much. So how does Migration Watch UK reach its conclusions?
The most up-to-date official statistics reveal that 125,000 people settled in the UK in 2000.
Groups such as the Immigration Advisory Service say that sounds a lot, but it represents less than a third of one percent of the UK's population.
Migration Watch UK then adds a further 60,000 to this figure to account for asylum seekers who enter the UK but "disappear".
The group then makes a number of further assumptions. Firstly, it estimates that there could be some 35,000 more people from outside the European Union who come on a visitor's visa and then never leave.
It then calculates that there are at least another 25,000 who arrive at these shores "clandestinely", for instance by hiding in a lorry crossing the English Channel.
Whether this is a double-counting of asylum seekers is not clear.
Official predictions The government's own figures are completely different to those of Migration Watch UK.
It says that there are no figures for undetected migration so predictions and calculations are impossible to make.
Its prediction for net migration to the UK from 2003 onwards is 135,000 a year. It does indeed agree that there will be an extra two million arrivals - but only by 2021.
The Home Office says that Migration Watch UK's figures should be treated with "considerable caution".
For its part, the Immigration Advisory Service, the main expert body dealing with the issue on a day-to-day basis, says today's predictions are little more than "idle speculation".
Economic arguments So this then brings us to the question of absorption. Migration Watch UK says that there is "no economic case for large scale inward migration".
This is something that numerous academics and the government reject.
The UK's population is getting older, meaning that more working age people are needed to prop up the world's fourth largest industrial economy.
Secondly, there is a current shortage of highly-skilled people in key sectors such as the NHS, public services and the IT industry.
Thirdly, if the UK's population becomes more highly skilled and educated, there will be more and more jobs that people do not want to do. All of these factors have come together to create immigration demands.
One study by the University of Swansea predicts that we need to increase immigration by a fifth to protect prevent a population decline and subsequent economic crisis.
Some of this thinking is already filtering down to government which is changing the entry rules to meet the needs of the job market.
Which brings us to the final question about Migration Research UK's predictions: Irrespective of the exact figures, how will it go down with the British public?
In May BBC News Online published a major survey of public attitudes on race and immigration issues in the UK.
Asked whether they believed that immigrants found it easy or difficult to integrate in the UK, some 61% of all respondents said difficult. The figure remained largely consistent across all ethnic groups.
But on the question of whether or not immigration was a good thing, the numbers differed quite dramatically.
Some 47% of white respondents said that immigration had damaged Britain with a quarter saying they did not know. Approximately a third of black respondents and Asian respondents also said they did not know - indicating the uncertain nature of the current debate on immigration to the UK.


The article begins with a question about Migration Watch's prediction that "more than two million people will arrive in the UK every ten years for the foreseeable future": Is it fact or is it hype? It's clear from the tenor and the structure of the article that Dominic intended his readers to believe the answer to be that it was "hype."

As we now know, not only were Migration Watch's predictions not hype then were in fact a significant underestimate of the correct figure of nearly three million people arriving over the ten years from 2001-2011.

The next stage of Dominic's article seeks to undermine Migration Watch's figures by casting doubt on their counting methods and on the possibility of ever reaching an agreed figure. Criticism of their figures from the Home Office and the Immigration Advisory Service, the main "expert body", is used to overwhelm them.

Looking back, knowing what we now now, the Home Office prediction cited here is staggering in its sheer wrongness!:

Its prediction for net migration to the UK from 2003 onwards is 135,000 a year. It does indeed agree that there will be an extra two million arrivals - but only by 2021.

So much for the trustworthiness of the Home Office under the last Labour government then!


What follows in Dominic's 2002 article is a section called 'Economic arguments'. This is where the charge of bias sticks most strongly - because all the arguments set out by Dominic are in favour of large-scale immigration. Isn't that remarkable?

All we get from the other side is

So this then brings us to the question of absorption. Migration Watch UK says that there is "no economic case for large scale inward migration".
This is something that numerous academics and the government reject.

What was Migration Watch's reasoning and why didn't Dominic think it important/relevant to inform his readers? No, those numerous academics finding it wrong seems to have been more than enough for him.

Another strikingly biased article from around the same time was:

This is classic BBC, isn't it?

The article's headline Could more immigration boost the UK economy? might lead you to assume that it is going to be a balanced presentation of both sides of the argument by an impartial BBC reporter.  It is, of course, absolutely no such thing.

From the early sneer about "screaming" national tabloids and "lurid headines and the shameless use of the phrase "knee-jerk xenophobia" through to the twice-repeated, gratuitous mention of then-Conservative leader Michael Howard's immigrant parents (as if touch of ad hominem spice undermined Mr. Howard's argument), the article is a piece of advocacy, pure and simple. It  argues for a "Yes" answer to the question in its title.

We hear from the then Labour government and the Labour-aligned think tank the IPPR (then a standing joke among BBC bias watchers for the number of times the BBC would quote it!)

On and on go the arguments in favour of large-scale immigration. The then-director of the CBI is tagged on as another voice in favour.

After 25 paragraphs of pro-arguments we get a mere handful of perfunctory paragraphs quoting opponents, this time without giving BBC online readers a single one of their arguments.

A classic biased BBC article that one, for sure, isn't it?

Will Smale is still employed by the BBC. You can read his articles on the BBC News website on a regular basis, should you so choose.