Whose Bias Is It Anyway? 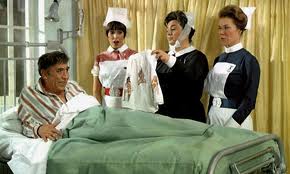 Is this an example of bias, or am I guilty of confirmation bias here? As they say on all the best entertainment shows, 'You decide!':

When I used to blog about Radio 4's Broadcasting House I would point out some of presenter Paddy O'Connell's little biases (as I saw them), including the way his obvious love for the N.H.S. would seep into some of his BBC work. Here's an example:

Broadcasting House today was not without its laughs and presenter Paddy O'Connell was mostly on fine form - and it read out in full Shelley's wonderful Oxymandias. It was not beyond criticism however. (Sorry Paddy, I may be feeling benign today, but there are limits!).


During his benign interview with Labour health minister Mike O'Brien, in the wake of Dr Foster's report on poor hospital standards, Paddy intervened to proclaim the glory of our beloved National Health Service (may it live forever): "Absolutely. And let me go further than you have. Millions of treatments are carried out with great skill, professionalism, and people are very happy. And our listener will want us to say that." Another ritual proclamation of love for the divinely-inspired NHS. The NHS may do great things, and I have experienced a few of them, but I've also recently heard a few horror stories from my friends in recent weeks that suggest that rank incompetence and rudeness are surprisingly common within the organisation and causing considerable distress. So Paddy, don't presume to speak for your listener.

Paddy's love for our national health service manifests itself from time to time on Twitter too:

From Sept 2011:
paddy o'connell ‏@paddy_o_c
After years of surgery, chemo, surgery and chemo, a friend is now cancer-free! Thank you nhs

The news today about the appalling abuse of patients at an NHS hospital in Worcestershire is the latest story to show the other, worrying side of the NHS - the side they didn't show during the Olympic Opening Ceremony.

Since writing the post above (three years ago), I seem to have been hearing story after story of rude, cold, neglectful or less-than-competent-sounding NHS treatment from relatives, friends and colleagues at work, some of them (or some of their nearest and dearest) facing serious illnesses. Not one of those people has (as far as I'm aware) complained officially about their or their loved one's treatment at the hands of NHS staff, so they won't be showing up on any official NHS figures.

How typical is this? My local NHS trust has been in the news over the last couple of years for some serious lapses in its quality of service, so this may be partly region-specific. (My "region-specific"!) Still, it is surely a concern.

Having heard the story on Radio 4's 8 o'clock news bulletin, it crossed my mind that Paddy O'Connell might try to smooth the story over if he covered it (an hour or so later) on Broadcasting House. It crossed my mind because I knew that I would be listening to Broadcasting House today and because I have long been of the opinion that Paddy (charming as he is) is just the sort of impartial BBC presenter who allows his biases to influence how he does his job as a BBC presenter.

That's a bias of mine. It means I think things like that when I should, perhaps, be thinking more about the story itself. That troubles me.

Every report I've seen about the Worcestershire NHS trust story (from the Guardian to the BBC News website) mentions the acronym "NHS" in its coverage of events at the Worcestershire Acute NHS Hospital Trust. Not once - from the introduction through to the programme's paper review take on the story - did Paddy O'Connell say "NHS" as he covered it (deliberately?)....that is until Paddy's three paper reviewers offered their own, occasionally painful experiences of under-par NHS hospital treatment, mingling them with more positive takes. Given the negative turn of the conversation as it proceeded, Paddy then intervened to pick up on one of those more positive takes:

"Is it possible that what we heard from Brian, both can be true. You can have people who believe that the NHS has saved their life, has been fabulous with very caring nurses and you can have stories of abuse - exceptions! It's possible in something this large for both to be true at the same time, I imagine."

Quite true, though how exceptional are those "exceptions"? Note also that Paddy's language in describing what those who are grateful to the NHS closely matches his own.

So "Health Secretary Jeremy Hunt has said he is “disgusted and appalled” at accounts of patient neglect at a hospital in Worcestershire" is a "bBBC" attempt to smear a minister in the Conservative-led coalition government? Only on Planet Confirmation Bias!
Posted by Craig at 17:42