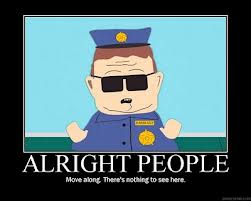 Andrew Marr sneaked a little editorialising into his initial run-through of the newspaper front pages this morning. He ran through The Observer, The Independent on Sunday and The Sunday Times without adding his own slant to any of their stories but on arriving at the front page of The Mail on Sunday, he said this:

"Nick Clegg, who's in favour of statutory press regulation, is all over the front page of The Mail on Sunday, over a charity involving his wife."

The phrase "who's in favour of statutory press regulation" nudges and nudges, winks and winks at the viewer, encouraging them to think "That Mail on Sunday story is nothing more than an attempt to take revenge on the Deputy PM over his response to the Leveson report" (on which the Daily Mail is not exactly keen, to say the least). The phrase "over a charity involving his wife" is vague and gives the viewer little sense of what the story is about. The whole sentence cries out, "Nothing to see here."

Is there nothing to see here?

The Daily Mail front page headline is Clegg's £12m favour to charity backed by his wife: MPs demand inquiry into huge payment. The online sub-headlines will give you a flavour of the article:

The article by Simon Walters and Glen Owen certainly makes things sound bad for Mr. and Mrs. Clegg, but it is full of things that read like over-egging the pudding - "Labour and Tories have called for an investigation", for example, appears to mean a Conservative MP, Peter Bone (who really has it in for Mr. Clegg), and a Labour MP, John Mann (who has never been slow to refer fellow MPs to the relevant authorities). And "charity back by his wife", "a charity linked to his wife", "Mrs Clegg – a prominent supporter of the charity – hosted a function for them just weeks earlier", "Miriam’s name came up", etc, don't seem to to add up to a very detailed account of Mrs. Clegg's involvement with Booktrust. Hosting "a lavish reception" for their 20th anniversary doesn't really amount to deep involvement, does it? So where's the meat? Ah, well, she has publicly praised The Gruffalo on the charity's website! Damning stuff! /sarc. Plus there are the usual question-begging phrases like "According to sources..", "A Whitehall insider said.." and "It is understood that..".

Stephen Tall at Liberal Democrat Voice is not impressed:

Well, there’s a turn-up for the books — the Mail on Sunday in its first post-Leveson front page decides to play the man (and woman) rather than the ball, and splash on a desperately thin story implying some form of scandalous link between Miriam González Durántez’s support for Booktrust and the charity being given a government grant.

The Lib Dems issued a statement that casts further doubt on the Mail's story:

The decision to continue the funding for Booktrust was made by the Prime Minister and the Education Secretary because it is the only organisation capable of delivering children’s books and literacy support on this scale, on this budget.

Any suggestion that Miriam’s support for the charity influenced that decision is obviously without foundation.

Miriam has no role with the charity, beyond being supportive of its excellent work and having hosted a reception for the organisation. It is a great pity that Miriam is apparently unable to offer her support to a charity without some newspapers resorting to these kind of smears and innuendo.

Now, I'm inclined to take their side in this, as it sound like a "desperately thin story" to me too; however, both The Independent and The Telegraph websites take up the story and report it, without rubbishing it. Presumably the fact that two MPs have called for an inquiry into the Deputy PM's actions was considered important enough for it to be reported.

Interestingly, neither the Guardian nor the BBC News website are reporting this. Yet.
Posted by Craig at 18:28