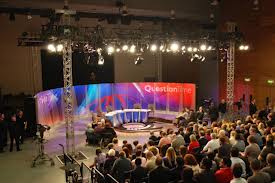 Our Questions, Questions post on the subject of the BBC's Question Time, using this week's edition as a test case, raised some concerns that the specific questions selected by the Question Time team on that particulate edition did indeed indicate bias - against critics of the NHS, against the Conservative Party, against those hostile to Chris Huhne and against the SNP - or, perhaps, to put it another way, pro-Labour bias.

So, there are big questions (minus Nicky Campbell) for the BBC to answer...

....except that the full list of questions asked on the programme over the past year - as chronicled on the preceding post We're running out of time, but..., - doesn't suggest anything like so simple a case against the BBC.

I know a lot of you have been reading them. (We have ways of knowing!). You will have formed your own opinions of them (hopefully). I suspect, if you're being honest with yourself, that you'll agree with me that any straightforward assertions of pro-left bias with regards to the Question Time team's question selection process will be easy for the BBC Complaints Department to refute (in the true sense of the word 'refute'). Here are some of the questions the programme makers chose:

When David Cameron called Ed Balls a "muttering idiot" was this improper language or a statement of the blindingly obvious?

Countries such as Norway and Switzerland have thrived outside of the European Union but still have strong trading links with EU member countries. Should the UK follow suit? [which, even though
Euroscepticism isn't only a right-of-centre phenomenon by any means, refutes the assertion that the BBC is always pro-EU ("Europhile") and always anti-Eurosceptic.]

Why should prisoners who've shown they cannot abide my the laws be given a say into society is run?

It hardly needs adding, obviously, that any simple assertion of pro-right bias in the questions selected would be very easy for the BBC to counter. I could fill about half a mile of cyberspace with counter-examples to that! (And I already have!!!) But, for the sake of any passing left-wingers critical of the BBC, here are a few savoury specimens:

Is the large number of Tory MPs opposing gay marriage symptomatic of a party out of touch with contemporary society?

Given that this week George Osborne has already begun blaming Ed Balls for his part in the Libor Scandal I would like to know what's to stop a parliament-led inquiry turning into a political squabble?

Is George Osborne discriminating against the under-25s with his proposal to remove their housing benefits?

Shouldn't the adoption limit be a matter for the morality of individual women and not Jeremy Hunt?

I really could go on and on and on here with examples but, as you can read them for yourself in a slightly earlier post, I won't bother here.

The most distinct trend is the repetitive nature of the questions. The same questions come round again and again and again. I don't think this is the Question Time team's fault. It reflects the news cycle (although that may be the BBC's fault). So, I don't think the actual questions are biased, but the phrasing is interesting, and it's hard not to wonder if the question are tweaked by the BBC before going out (especially after Sue prompted me to wonder about this!) The questions are also often put in such a way as to provoke a predictable response.

Moreover, the questions - as you'll have spotted - have an anti-government bias in that there are an awful lot of questions that are unhelpful to the present (Con-Lib) government. Does that make them anti-Tory? Well, I don't know (to be honest). There are anti-Lib Dem questions too (as you can see), but named Conservatives feature far more often in the anti-government questions. "Ah, of course they do!" some of you will cry. This is a Conservative-led government after all (as Ed Miliband wanted us to say - and as we are all now saying, for some reason) and the BBC is bound to encourage criticisms of the government of the day, whoever that might be. If I could list a year's worth of examples of questions put by Question Time audience members during Labour's term of office I might be able to prove a difference but I can't, and I can't. (Damnation!)

Sue: I haven't spotted a distinctly leftie trend in the actual questions, but I think the bias would be more detectable if we take into consideration the political affiliation of each particular panellist and the MSM attitude towards the topic under discussion. I mean, say, when Abu Qatada comes up, or the police, or the economy in respect of government cuts etc, you just know which side the audience will like. Unless  a panellist has previously expressed a controversial opinion, say, someone like Melanie Phillips, or a prominent member of the government, in which case they'll stand by an unpopular opinion, not many speakers will deliberately court the audience's disapproval.  There are pressures in that there bear pit.

These things are certainly not a simple matter of statistics in the superficial sense, (how many lefties, how many leftie questions, how many leftie interruptions) although it could possibly be broken down into a statistic-friendly format by analysis of some sort. Then, the analysis would inevitably be biased as well. All I'm saying is that the very public sociologist isn't as clever as all that.

It is a difficult task we’ve taken on. We set out with an agenda, which was to show that despite Phil Sociologist’s stock-take, his findings were not conclusive. QT is still a leftie bear pit. However, this has proved surprisingly slippery to nail.

I think that even though I suspect the questions are tweaked by BBC staff, it could be simply to make them more controversial, or “make sparks fly” as I used to say. Ratings and all that.

Using the next most recent edition as an example. (31/1/13 Lancaster)

"Is reducing the travelling time from Manchester to London worth £30 billion?"
How else could that have been phrased?  It’s quite straightforward. Make of it what you will. The implied criticism of the enterprise HS1 or whatever it’s called, is probably in the eye of the beholder.

"Are we wise to become involved in another Islamist struggle in Mali?"
“Another Islamist struggle” is one way of putting it. It at once minimises the threat of Islamism, and implies that fighting Islam is an un-winnable aspiration, and also that foreign matters might be considered none of our business.  Is that politically motivated?  It is concisely worded though, and it’s the kind of question whose meaning could be interpreted according to who asked it of whom. If you see what I mean.

"With the Cumbria vote against the nuclear waste dump is it time the government turned its back on nuclear and backed renewables instead?"
This one ‘sets the scene’ in the first part of the question, which makes one suspect the BBC had a hand in composing it.  It’s certainly loaded towards ‘green’ / against nuclear, but maybe that’s for the sake of provocative questioning.

"Should Prince Charles ask the Queen to go dutch? "
Ha very ha. I can’t even remember what that was all about. It doesn’t particularly sound as though the BBC wrote it, but was it too witty for the questioner?

"Should Nick Clegg send his children to private schools?"
Again, that was obviously designed to spark off a debate about hypocrisy, bad state education and class. Cleverly phrased, but it could have been as *innocent face* as one wanted to make it.

"Polish is now the second language in the UK. Will we need to revise this to Bulgarian or Romanian next year?"
This is neat. It’s about immigration, but it sets the scene again, carefully bringing in the Polish language stats by only alluding to Eastern European immigration so as not to appear racist or Islamophobic.

I suppose one could pull every question apart, trying to find obvious examples where it looks as though the BBC has manipulated the way the question is worded. Consider that the phrasing affects the outcome, thinking of it in the same way we query the wording of a referendum.

If the BBC does tweak the questions, it could merely be justifiable editorializing. I mean if the audience only came up with a bunch of long-winded clumsily worded questions, they’d have to amend them as a matter of good practice. But on the other hand, as it’s the BBC, all that will necessarily be from a certain perspective. On their terms. They aim to provoke the kind of discussion that they know will humiliate the nasty Tory and glorify the nice altruistic leftie. They know there will be bullying by the audience, because they think it is what makes a good programme. A lot of TV features / relies on bullying.

You will doubtless have spotted Damian Thompson's piece in today's Telegraph about political schadenfreude (in the wake of Chris Huhne's disgrace). He shares in "the delicious, malicious joy of shaming politicians" but is conflicted about this, given the atrociousness of the way people (especially on public forums) behave in response. It's an outstanding piece and one line in particular stands out for me as especially capturing the spirit of Question Time:

....when I watch Question Time and compare the terrified waffling of the panellists to the sneeringly cheap shots of the audience and the idiots live-tweeting the show, I can’t help wondering: who here, exactly, is incapable of feeling shame?

"The line the audience will take" is, as you say, something it's so easy to anticipate. Cheap - and highly predictable - shots from the audience abound. The politicians waffle, tugging their forelocks beseechingly to the potentially-baying bear pit.

The plight of the controversial rightie in the bear pit is an interesting one that deserves further investigation.
Posted by Craig at 21:43