Is 'Islamist' about to go the same way as 'terrorist' at the BBC?


The BBC has frequently been criticised for its refusal to use the word "terrorist" in its reporting of terrorist acts. This isn't merely an informal refusal. It is enshrined in the BBC's Editorial Guidelines:

From a piece which has just appeared on the corporation's College of Journalism (COJO) blog it appears as if rules governing the use of another word might also be about to become enshrined in the BBC's Editorial Guidelines:

There has apparently been "heated debate in the BBC African newsroom" about the use of the term, though the article itself merely presents one side of that "heated debate" at this point:

The concerns of journalists there seemed to centre on the use of ‘Islamist’ as journalistic shorthand for Islamist militant/extremist/rebel/terrorist, or in circumstances when the militancy or violence referred to has nothing to do with Islam.

The discussion between the three BBC reporters then begins. The BBC Urdu reporter shares both of those concerns:

Aamer’s view was that precise language is the only way to avoid misleading readers and audiences. “The confusion is where you use [Islamist] interchangeably with the words ‘militant or extremist’. It’s just plain wrong - as wrong as calling a tortoise a coconut,” he argued colourfully.

Besides, not all militant groups are Islamist. The Taleban in Pakistan? Yes. It would be inaccurate to describe the Taleban as just a militant organisation, Aamer believes. But al-Qaeda? In his opinion it is not necessarily an Islamist militant group because its driving political focus is anti-Americanism.

Now I have to admit that my jaw dropped open (and not only figuratively-speaking) at this point. al-Qaeda isn't Islamist?!?!?!? Probably not, according to a top BBC reporter. Isn't that a truly astonishing thing for a BBC reporter to say? To believe it requires us to ignore what we know to be the prime aims of al-Qaeda and its affiliates in the countries of the Maghreb, in Kashmir, in Somalia, in Syria, in Nigeria, in Yemen, etc. They want Sharia. They want to establish Islamic rule. They want an Islamic Caliphate.  Yes, anti-Americanism is important to al-Qaeda, but their enemies are many and various. They also hate Israel and India. al-Qaeda kill Westerners and non-Westerners of all colours and creeds. They kill Christians, Hindus, Buddhists and, wherever they can, Jews. They also kill non-orthodox Muslims. To dismiss the movement's driving belief in political Islam is quite incredible and really makes me worry even more about the BBC Urdu Service. 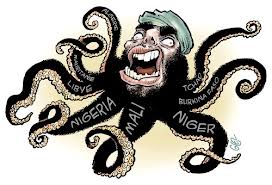 Anyhow, back to the question in hand: "‘Islamist’ - acceptable shorthand or dangerously misleading?"

Aamer believes it's dangerously misleading. So he falls into one camp. What of the two other BBC journalists party to the discussion? Well, the BBC African Service's representative is in the same camp as Aamer:

An uncompromising Josephine Hazeley thought the word ‘Islamist’ should be qualified whenever it is used: “If you’re talking about a group that espouses violence by using, unfortunately, the Islamic religion, you should qualify it.”

So that's two in the "unacceptable shorthand" camp. What about the third BBC reporter, Artyom Liss? Is he going to dissent from this emerging BBC consensus and stand up for the use of "Islamist"? Of course not. This is the BBC after all:

Her Russian counterpart concluded that ‘Islamist’ is an empty shell of a word: “It’s bit like ‘the international community’ - a convenient term when you don’t really know what you want to say.”

So far then, this "heated debate" within the BBC has only heard from one side of the argument - the argument opposing using "Islamist" as a stand-alone term.

Cathy Loughran then put these concerns to Ian Jolly, the BBC newsroom's style guide editor. Ian is clearly already heading in their direction of travel, but hasn't quite arrived there yet:

“Our own view is that an Islamist is someone who derives a political course from Islam. But it’s vital that we make clear what sort of course that is. For instance, there are Islamist political parties in various countries and Egypt has an Islamist president.

“So, if we are talking about Islamists pursuing a violent course, we should say so - ‘Islamist militants’, ‘Islamist rebels’, ‘Islamist extremists’. But context is, as always, important too and once we have established what we’re referring to then ‘Islamists’ on its own can be an acceptable shorthand."

He's getting ever closer though to the emerging BBC consensus, ending by 'conceding' much of their argument:

"In general, though, Ian says to be specific. “Although sometimes even these labels are no substitute for a more detailed explanation of what is motivating a group or individual,” he concedes."

I wouldn't be surprised if this marks the first stage in the process of banning the use of the word "Islamist" from BBC reporting (in much the same ways as the word "terrorist" has been banned), namely a Editorial guideline prohibiting the stand-alone use of "Islamist" (except in quotations from outside the BBC). It looks as if the BBC is already moving in that direction and the force behind this COJO piece strongly suggests it will be a point conceded at the highest levels of the BBC. Where will it lead onto from there?

What will the Islamists make of all this BBC hand-wringing?
Posted by Craig at 14:02