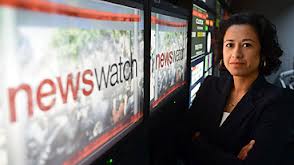 Newswatch with Samira Ahmed (BBC News Channel yesterday evening, BBC One this morning) offered a fine example of the BBC fearlessly holding itself to account.


It led with the hottest BBC News row of the moment - one that has raged across the blogosphere for days now, with the intensity of an Australian bush fire: Why was former cabinet minister Chris Huhne's guilty plea over perverting the course of justice and the announcement of his resignation as an MP (resulting in a by-election) treated by the BBC as if it was a more important story than the surely infinitely more significant breaking news of Richard III's bones being discovered in a car park? A couple of Richard III fans had understandably got the hump over this and were bravely invited into the studio to air their wintry discontent at the BBC's scandalous behaviour. They dismissed the Huhne story as completely unimportant. I'm sure we can all agree about that. The BBC's age-old animus against Richard III truly knows no depths.


Then it was onto how the BBC covered the gay marriage vote. Some viewers were outraged that the main evening news bulletin had got the spelling of 'marriage' wrong. The caption read 'Gay mariage'. "It's completely inexcusable. Hang your heads in shame!", one viewer wrote. Two other similarly offended Newswatch viewers agreed and got their complaints read out too. Rightly so. It's a very important point. It does make you wonder how on earth some blogger types (you know who you are!) can keeping banging on about biased BBC coverage of the issue when the real issue, the one that genuinely matters, is the question of whether typos are changing the whole fabric of British society for the worse and whether the BBC is actively proselytizing in favour of those typos?

Someone else complained about the use of 'gay' in the term 'gay marriage', saying it discriminated against bisexuals and transsexuals. The phrase 'same sex' should have been used instead, she/he/it said. I imagine that most of you are just as angry that the feelings of vulnerable, socially-excluded transsexuals have been hurt in such a shameful way by the BBC. You should write to your MP about it.


On the BBC's coverage of the Stafford Hospital scandal, a viewer was appalled. Why, oh why, was the reporter standing outside the hospital needlessly? It's a disgrace! Who cares about what he was reporting, the real issue surely is, was and always will be the question of whether reporters should be standing outside the places they're reporting from. The BBC should extend the Savile Inquiry to cover  that very subject.

Another viewer demanded High Definition local BBC News, so that they could watch all the news about local accidents, cuts, murders, court cases, cuts, weather and football results in the highest possible quality. I'm with them on that. When I'm watching North West Tonight I find my appreciation of their reporting of the cuts is severely curtailed by the lowness of their definition. Samira and the Newswatch gang put the challenging question of High Definition local news to the BBC. I can't remember the answer they got as I nodded off for a few seconds at that point.


Then it was back to sloppy grammar. It's the thin end of the wedge, innit? A BBC reporter was being overly-colloquial, dontcha know, and a Newswatch viewer felt it worth complaining about. A Newswatch producer thought it worth airing too. Quite right!

I must admit I really wouldn't want to have been a BBC bigwig watching Newswatch this morning. It would have ruined their enjoyment of their coffee, croissant and Saturday Guardian. The new DG's days are, I suspect, numbered after this edition of the programme. Lord Patten is rumoured to be already packing his bags. (It's trending on Twitter, so it must be true). Moreover, parliament, led by the cross-party Friends of Richard III group, will be debating the removal of the license fee on the strength of this.

Who needs blogs to take on the BBC when there's Newswatch to give the corporation such a ferocious drubbing, week in and week out?
Posted by Craig at 10:23