Polly and the Nightjar

Forgive me for NOT being a 'negative nelly' about the BBC for a moment, but I used the extra hour given unto us by the clocks falling back (as the mnemonic says - though I keep getting confused between falling back and falling forwards, springing back and springing forwards) to listen to Radio 4 between 6 and 7 o'clock and was transfixed by the delights of Something Understood and The Living World.

Something Understood was about our need for art, but playwright Polly Stenham used it chiefly to explain what writing plays means to her - and doing so in highly-charged, poetic language. She got so metaphorical at times that I sometimes lost the sense of what she was actually saying, but her enthusiasm and general meaning was plain - and touching. I was persuaded.

Anyhow, her use of language, even when I didn't understand it, was something out of the ordinary, and none the worse for that - and much the same could be said for some of her musical choices. I've never heard Florence and the Machine before, and was rather taken by them. They even sang a version of Addicted to Love.

The Living World went out into the woods of Somerset on a hot, midge-ridden summer's night to see and hear nightjars. Chris Sperring (and his unseen producer Ellie Sans) accompanied two nightjar experts there - Ian Parsons and Andy Harris. The results were informative and fascinating. 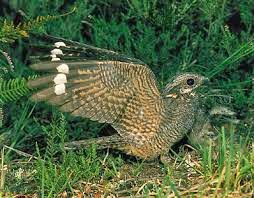 Despite the midge, I wouldn't have minded being there too - especially to hear that astonishing call of theirs (the nightjars, that is) which I'd describe as being like a 1960s sci-fi computer buzz, oscillating between two notes, then tumbling down step-wise to the accompanying of rhythmic claps as the bird's wings beat and take to the air.

A tip for anyone tempting to go and listen to nightjars: Cup your hands around your ears to amplify its call.

Nightjars arrive late (early May) and leave early (late September). They come for food - moths. They migrate, taking much the same path as swifts and cuckoos, down over the Med and over the Sahara to central and southern Africa.

In a pleasingly upbeat bit of news, we learned that nightjars are doing well. Numbers are up. They are widespread too, so most of us should be able to experience them (at dawn or dusk) somewhere near to where we live.

If I'd have known I could have used that extra hour to watch nightjars instead - except that they're probably all in Africa now, so there wouldn't have been much point.
Posted by Craig at 09:16

Labels: 'Something Understood', 'The Living World'