One of the things you can do with TVEyes is check for the use of a particular word on a particular channel over a specific period of time.
For instance, since June began till the time of writing this post [6am, Monday 27 June], there were 170 results for the word 'insisted' on the BBC News Channel.
If you go through them and remove all the results that aren't comments made by BBC reporters/presenters - e.g. ones where non-BBC interviewees or children talking of their parents, etc - that shrinks to 161 uses. Then if you count the individual times the word is used about a specific person/organisation/government you might see patterns emerge.
Here then are all the uses of 'insisted' by BBC journalists/presenters over the course of some 26 days this June:
Boris Johnson/The Prime Minister - 52
President Zelenskyy - 7
The Royal Household/Clarence House - 6
Royal officials - 17
The Government - 2
Priti Patel/The Home Secretary - 24
The Home Office - 1
Kwasi Kwarteng/The Business Secretary - 6
The RMT union - 3
Grant Shapps/The Transport Minister - 6
Naomi Long/ Alliance Party leader - 3
Gatwick Airport - 4
Donald Trump - 3
Therese Coffey, Work and Pensions Secretary - 3
Liz Truss, Foreign Secretary - 2
Brandon Lewis, NI Secretary - 8
The Kremlin - 1
Iran - 1
Breakaway golf tournament organisers - 2
Gotabaya Rajapaksa, Sri Lanka president - 4
Jim Fitton, British geologist accused of breaking Iraqi law - 1
The Queen, in a joke by Rod Stewart  quoted by the BBC - 1
Gustavo Petro, new Colombian president - 2
Liverpool FC - 1
The French authorities overseeing Champions League match - 1
As you can see, it's overwhelmingly the UK Government and the UK Royal Family that's been 'insisting' things so far this month, with Boris 'insisting' most of all. 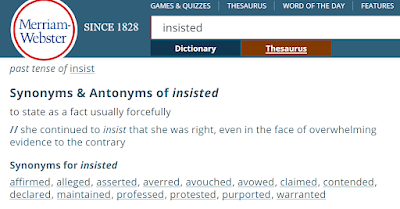 'Insisted' is, of course, potentially a neutral word describing someone stating something assertively, but - as in the example used by Merriam-Webster above - it can carry connotations of someone asserting something defensively. As I've written before, my ears always prick up at the BBC's use of the word "insisted" as (to me) it usually implies 'over-defensive pleading by someone the BBC thinks is wrong'.
And the above list is largely - though not exclusively - a list of BBC 'wrong-uns', isn't it? You'll spot lots of government ministers but no-one from the Labour Party, plus Donald Trump but no Joe Biden.
Revealing, or not?
Update, 8.07am: By coincidence, I just put on Radio 4 and literally within 10 seconds heard another 'insisted', this time from the BBC's Ben Wright. "While ministers insist the plan is legal Labour says unilateral actions would break international law," insisted Ben.
Posted by Craig at 06:16