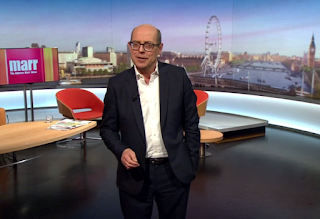 The paper review and three of the main interviews spent considerable amounts of time on the subject, which the programme obviously chose to make its main story of the day. #BBCbias?

At least this meant that Rob Burley surely wouldn't have to spend time fending off hordes of Corbynistas furious that the story wasn't being covered.

Well, you'd think that but the world of Twitter isn't always a reasonable place:

Shardon: #marr you could see Nick Robinson saying with glee. #windrush isn’t on the front pages anymore yippee. #bbcbias
Rob Burley: No he reported it. The "glee" was, literally, in your imagination. He then went on to interview Benjamin Zephaniah on the actual television about the very issue you seem to think he wants to suppress.

Colin Lewis: Nick Robinson more obsessed with Benjamin Zephaniah's birthday than the issues raised by this punishing government. #Marr
Rob Burley: The issue the interview was literally all about?

Sandra Patterson: Tory boy Nick Robinson on #marr trying to dismiss the #WindrushScandal as a storm in a teacup.
Rob Burley: By repeatedly interviewing people about the issue on television? He's doing it again right now.

Alladin Noons: He also appears to be speaking with Emily Thornberry about Windrush. Maybe people were hoping for a government minister rather than shadow.
Rob Burley: Well there's one coming along in a minute...

steve: Benjamin Zephaniah gave Robinson, the BBC, the PM, Home Secretary, Home Office, Border Agency and Govt an easy ride on #marr. The guy is too nice and polite. The community needs good guys like him to get radical; and quickly.
Rob Burley: Even Benjamin Zephaniah is getting in the neck! Apparently Steve here speaks for BZ's community. I thought Benjamin was a great interview and hope to have him back.

Rob Burley: Oh, Nick Robinson - who is being accused of ignoring or wishing to suppress Windrush story, is starting third interview on the subject #bbcbias

Even Tim Fenton of the pro-Corbyn Zelo Street website tweeted "Nick Robinson giving equal amounts of grief to both Emily Thornberry and David Gauke" - and he was right.

At least this meant that Rob Burley surely wouldn't have to spend time fending off hordes of Corbynistas furiously claiming that Emily got it hard while Gauke got it easy.

Well, you'd think that but, again, the world of Twitter isn't always a reasonable place:

Crashed: Nick, you've tried to make this all about Labour and general immigration policy from years ago #Marr
Rob Burley: It's an interview with Labour. You want us to just give Labour questions about the Government? That's not how democracy works. 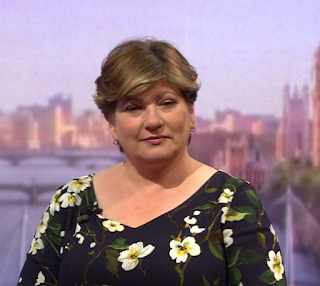 Sean's Sweary Tweets: There we have it. BBC shoehorn blame for the Windrush scandal on to Labour. That smirking twat Nick Robinson's 'gotcha' moment that Alan Johnson was the first to use the words 'hostile environment' So yeah it was all Labour, not the racist Tories Theresa May and Amber Rudd.#marr
Rob Burley: Should we suppress Labour's record on immigration in a Labour interview and just ask them to criticise the Conservatives?

Russell Merryman: Nick Robinson's focus on Labour's use of the words "hostile environment" for law breakers, rather than the Tories' use of the words for legal migrants is the kind of journalism that gives the Daily Mail a bad name. BBC News should know better. #marr #fbpe
Rob Burley: It was an interview with Labour. We ask them questions about their record.

Berni Deenihan: Now that you’ve brought up historical statements by the then labour government, will you show Theresa May on question time in the early noughties stating that home office ministers blaming civil servants for problems at the home office should resign. #marr
Rob Burley: Yes. Right now actually. Sorry if this disturbs the narrative.

Rob Burley: Numerous tweets criticising the interview with Emily T because it centred on Labour's record rather than questions inviting criticisms of the Government (although there was opportunity for that too), And this is apparent evidence of bias when, in fact, it's the opposite  #marr

YorksLass: Nick Robinson You give Emily Thornberry a tough time yet David Gauke gets an easy ride when he points finger at UK Labour. #Marr. Jeremy Corbyn on the rightside of history. #NastyParty #immigrationPolicy called out for what it is. #Windrush is the consequences.
Rob Burley: Here we are - tough on Gauke but that can't register with people with a pre-set narrative.

Shardon: I Don’t need to apologise for accusing Nick of bias. Government is on the ropes here and Nick just walks away from the knock out aggressive to Thornberry and Tory gets understanding nods . #bbcbias #marr
Rob Burley: No reasonable person watching the Gauke interview could think that.

Even Rob sounded to be getting a bit weary eventually:

City 'til I Cry!: The contrast between  Nick Robinson hostile interview with Emily Thornberry and his matey chat with Fauke was clear for all to see. No surprise given Robinson's well known allegiances. But still unprofessional.
Rob Burley: What's the point?

The point, of course, is that the BBC is getting all manner of silly complaints about BBC bias at the moment and Rob Burley is doing a sterling job in debunking them. With them out of the way we can hopefully focus on the the real questions about BBC bias. 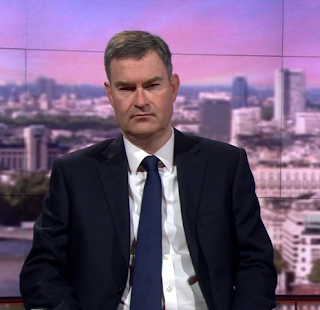 P.S. Here are a couple of bonus exchanges:

And no Sunday would be complete without Pam:

Pam Crossland: Paper Review on #Marr features one tory and one Fib Dem but no Labour - are the BBC aware of the law regarding broadcasters showing balance during elections? #BBCbias
Rob Burley: Balance is across the whole election period. It would be impossible with the number of parties to have balance on every single show. Emily Thornberry is one of the main guests. So, yeah, on it regarding the law.

That said, at least someone - the splendid David Buik - had something nice to say about the programme:

David Buik: Marr-on-Sunday - what a class act Nick Robinson is - he made a huge amount out of a few pretty tawdry issues with gusto and panache! So glad he is in good health!

Mr. Buik is a class act too.

As the sun returns, spreading its golden cloak over sun-prone Morecambe, R Rob is just getting back into action as the tomfoolery continues:

Buddy Hell: I see The Sunday Politics, Marr and Peston swept Windrush aside to concentrate on #Antisemitism in Labour. Agenda? Oh no, of course not. Do they really hate Black people that much? Stupid question. Yes, they do. Fucking handwringing liberal schmucks.
Rob Burley: You obviously didn’t actually see Marr or the Sunday Politics which had tons and tons on Windrush. Just making things up.
Buddy Hell: "Tons and tons", my arse. Next, you'll be telling me that I'm "imagining" racism.
Rob Burley: Did you watch Marr? I don’t think you possibly can have done. The Marr paper review featured the Windrush, as did subsequent interviews with Benjamin Zephaniah, Emily Thornberry and David Gauke. Sunday Politics film was about “hostile environment” and immigration. So the lie is a ridiculous one.

In fairness to Rob, that nice, reasonable-sounding Buddy certainly was just making things up. (And he went on and on, just as charmingly).

It was definitely much closer to 'wall-to-wall Windrush' than 'no Windrush' on the BBC One's political programmes today.
Posted by Craig at 11:35