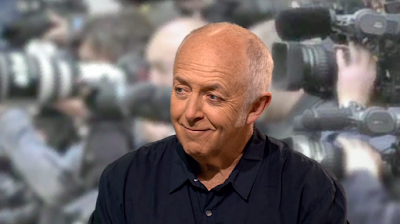 SAMIRA AHMED: Hello, welcome to Newswatch with me, Samira Ahmed. Has BBC News been too quick to accept the British Government's narrative of what is happening in Syria? And how does Middle East editor Jeremy Bowen face the challenge of getting to the truth about that country's civil war? Who is doing what to whom in Syria, and what the West can or should do about it, has been much argued over in the seven years since pro-democracy protests sparked the civil war there. The debate has been particularly impassioned since Saturday's air strikes by the US, the UK and France in retaliation for the suspected chemical weapons attack two weeks ago by President Assad's forces. And part of the discussion has focused on how the BBC has reported that alleged attack, and the military response to it. Brian Tickle describes himself as:

Extremely angry that the BBC is not challenging any of the narrative our government is continuously spouting regarding the airstrikes. It should be the BBC's job to hold our government to account, and not just to regurgitate their press releases, which closely resemble the Russian propaganda that our government is so derisive of. Come on, BBC, investigate, don't regurgitate.

We're bombarded by a cannonade of anti-President Assad propaganda, based on unproven speculation and supposition. Phrases such as 'highly likely' pervade your slanted broadcasts, while finding a guest to give an alternative perspective is like searching for a needle in a haystack.

Well, one guest who did provide a sceptical perspective was former head of the Royal Navy Lord West. Speaking to Annita McVeigh on the News Channel on Monday, he said the sources for the supposed chemical attack were not neutral, warned that we have had some bad experiences on intelligence before, and added the idea of President Assad unleashing a chemical attack on Douma seemed extraordinary.

Lord West: He'd had a long, long, hard slog, slowly capturing the whole area of the city. And then just before he goes in and takes it all over, apparently he decides to have a chemical attack. It just doesn't ring true. Annita McVeigh: We know that the Russian Foreign Minister, Sergey Lavrov, said on Friday, or accused a western state on Friday of perhaps fabricating evidence in Douma or somehow being involved with what happened in Douma, given that we are in an information war with Russia on so many fronts, do you think perhaps it is inadvisable to be stating this publicly, given your position and your profile? Isn't there a danger that you are muddying the waters?

That question was considered inappropriate by some of those watching, with Caitlin Johnstone reacting like this:

Whoa, did that just happen? Did a BBC reporter just suggest that it could possibly be 'inadvisable' for a retired naval officer to make public statements questioning what we're being told to believe about Syria? That the conversations shouldn't even be had? That the questions shouldn't even be asked? Because we're trying to win an 'information war'?

And others agreed. Harry Carson tweeted:


To express doubt over intelligence reports is to be considered an apologist for Assad. Shameful.

Well, we put those points to BBC News, and they told us:


It is the job of BBC presenters to ensure all angles within a debate are explored and challenged. That is exactly what happened in the interview with Lord West, whose opinion added to an already wide range of views aired on the BBC, but which was rightly explored by the interviewer. In a wider context, reporting on conflicts such as the one in Syria is always challenging, but we have taken great care to ensure that claims made by all sides are thoroughly analyses and verified through the use of trusted sources and evidence. When definitive evidence is not available, we will always treat a claim with an element of caution and make sure our audience knows it may be unsubstantiated. 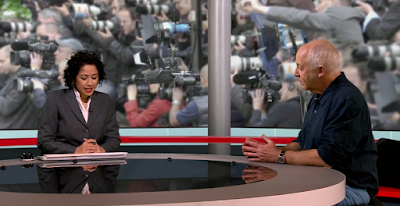 Well, one of those with the task of providing some clarity on Syria's civil war through reports from the region, or, as he has been doing this week, through analysis from here in London, is the BBC's Middle East editor Jeremy Bowen. And he joins me now. Welcome back to Newswatch. The last time we spoke it was also about Syria. How hard is it now to get the truth of what has been happening in Syria?

JEREMY BOWEN: Well, it is always hard, it has always been hard, to be honest. It was pretty hard before the war as well because of the nature of the regime. But since the war started, it's always difficult. If you are working in daily news, or sometimes when I am in Syria we might spend a week putting together one piece that runs, you've just got to do your best. Dig through things as much as you can, use basic journalistic tools like your eyes and your ears to try to find out what is going on. But, no, it's not easy, it's hard.

SAMIRA AHMED: One of the other things that seems to have changed over the last few years is the role of social media. There are concerns about governments using it as a way of asserting their version of events. What impact does it have on your reporting?

SAMIRA AHMED: Your colleague, Lyse Doucet, is out there now in Syria. You have, of course, been many times as well. When you are on the ground, inevitably, you probably find yourself embedded with either the Syrian government or the rebels. Is it possible to get the whole picture that way?

JEREMY BOWEN: Well, when you do Syria, you basically either do the rebels or you do the government. Because to do the government's side you need a Visa, issued in Beirut, the Syrian Embassy. If they find out that you have been working on the rebel's side, you will get blacklisted and you will not get another visa. The thing about daily news is that it's a snapshot of what is going on. You really do your best to try to make that snapshot as sharp and as true as possible. But it's sometimes not the last word, because if it is a breaking story, we might have very little time to put it together. So the key thing is to be accurate. Don't say things you don't know. Try to give people a flavour of what it is like to be there. But, most of all, it's got to be real, it's got to be true.

SAMIRA AHMED: There has been, or there have been, some significant voices, including Lord West, former head of the Royal Navy, who said that there is some doubt about the chemical attack. What would you say?

JEREMY BOWEN: Well, until there are definitive scientific tests from the site, saying, yes, we found traces of whatever it may be, chlorine or sarin, or nothing, then we don't know. Up to now, it has been governments saying, "Yeah, we've got intelligence, we've got information." And I must say, they must have very efficient intelligence services if they can get stuff out of eastern Ghouta that quickly and get it analysed. But maybe they have men on the inside, who knows? As well as that, there's the evidence of testimony from people. And there's also the pictures. I've seen lots of them, I've seen all of them that I could, which showed lots and lots of dead people, lots of children dead as well, with foam all around their mouths, which tends to be a sign of having used chemical weapons. Those scenes were so realistic that I would find it very hard to believe they could be faked. Now, maybe something else caused that. But no, that is why we have been quite careful to use phrases like suspected chemical attack. We haven't been saying, yeah, it's a chemical attack.

SAMIRA AHMED: Because some viewers feel that the BBC has been too quick to treat it from the British Government's assertions?

JEREMY BOWEN: I don't think we are treating from the British Government's assertions. I think that if you get reports and testimony from people that there are possibly dozens dead because of an attack, and there were clouds of some kind of white smoke, people were dying foaming at the mouth, you've got to take those kinds of things seriously. Considering the track record in that particular country. We are very sceptical, I am very sceptical, about what governments say. Really, believe me. If viewers look at our scripts, we are careful with the language we use.

SAMIRA AHMED: Do you have any frustrations about the coverage of Syria?

JEREMY BOWEN: Yeah, of course. Access is one. Sometimes it's very hard to get visas to get in. Sometimes we wait months. Answer - I haven't got a visa! So, yeah, access, visas, ability to move around when you are there. And there are other kinds of frustrations as well. I get frustrated. I have an ongoing dialogue here, a long-running dialogue in this building between myself and programme editors, which frankly has been going on in different versions for about 30 years. Which is, I think we should show more of the horror. Because I think people need to see that realism. The policy here, though, is that we should be a lot more considerate of people's feelings and not upset them. My argument is, you know, and it's an amiable argument that we have here, but my argument is that you see people watching video games, and there's a lot of shooting going on and it's completely unrealistic because it's a video game. And you see people watching TV dramas, shooting and killing, and it's completely unrealistic because it's a TV drama. But if you see real shooting, and real killing, and the effect sometimes high explosives have on humans, and the suffering that it causes, then you get closer to the essence of what being in a war is. And I actually do think that if people have a better idea of that, they might be even more... They might find it even more abhorrent than they already do.

SAMIRA AHMED: Jeremy Bowen, thank you.
Posted by Craig at 16:09