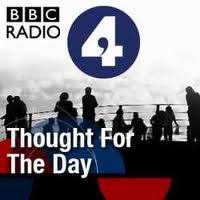 For the millions of ardent fans of Thought For The Day, Today's daily offering of short religiously-inspired talks - though the word 'inspired' doesn't always spring to my mind while listening to many of them -, here's a list I prepared earlier which may be of interest.

If you're bursting to to know whether Giles Fraser has been on more than Angela Tilby, here's your chance to find out.

Does the BBC monitor such things? If it does it has never revealed its figures for TFTD for public consumption - as far as I'm aware.

The BBC website used to have a dedicated archive for past editions of TFTD since February 2001 which listed every appearance by individual speakers. They stopped updating the archive in April last year and removed the page altogether earlier this year. That means that tracking who’s speaking on TFTD either becomes a slog from each page of the Today programme’s archive (with its occasional gaps) or, much easier, a run through the (ever-amusing) archive at ‘Platitude of the Day’.

I did a tally a year or so ago, after someone on another blog wondered whether a FOI request could be put in to get the BBC to give figures for TFTD speakers. (He had his reasons for that. He thought they were inviting too many Muslims on.). Updating it to include all recent editions of TFTD thus provides a complete record from February 2001 to 3 August 2012.

The following list shows the number of talks given by TFTD speakers over the last eleven and a half years, in descending order (with their religious affiliation, for added spice):

There have been 92 individual speakers on TFTP. The number of speakers representing each religion breaks down as follows:

There have been 3443 TFTDs over that period.

This is the total number of talks given by representatives of each religion (and their percentage of the total):

The above figures, of course, say nothing about the standpoint of the speakers. Regular listeners of TFTD will be able to draw their own conclusions from the list of presenters above.

As regards the question 'Is the BBC biased?' I'll leave you to form your own opinions.
Posted by Craig at 14:53