Tell Us A Story

Jon Donnison will be flattered to see that the newly launched website BBC Watch contains several articles dedicated to him. Donnison is another BBC Middle East correspondent who makes no secret of his pro-Palestinian position; he Tweets about it openly.
BBC employees are instructed to cover their Tweeting habits  with a meaningless exclusion clause -  “Tweets are my own views, not the Beeb’s”  - but it’s obvious that concealing their personal views is hardly a priority, and revealing them isn’t considered a hindrance to the BBC’s claims of impartiality.

Donnison’s puff-piece about a Yasser Arafat Lookalike in Ramallah was praised by the BBC’s Middle East Bureau Chief Paul Danahar,who called it “a cracking piece”.
The jocular style somehow encapsulates the perplexing blind spot that afflicts the BBC’s Middle East correspondents. They share the inability, or an unwillingness, to register the difference between the liberal, predominantly gay media folk they mix with back home and the illiberal, homophobic, intolerant individuals whose cause they aspire to promote.
They don’t identify with Israelis. Instead of making a positive comparison between them and their liberal, secular, supposedly tolerant media-world colleagues, Donnison, like most BBC people, is suspicious and distrustful of them.
Judging by the photo in the article, the lookey-likey doesn’t look like the devious fraudster Arafat at all. The resemblance is all in the tea-towel. 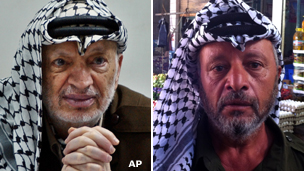 It’s a supposedly jovial piece, yet Donnison gratuitously insinuates that Israel was responsible for ‘the poisoning of Arafat’, deftly evoking the conspiracy theories that he jokingly mentions a paragraph or two earlier. Donnison gives us an idealised version of Arafat, presenting him as a hero, which he was not.

I’ve been writing about Donnison for some time. I tapped ‘Jon Donnison’ into Biased-BBC’s search box to find out just how much material I’ve amassed.

A newish article headed “Violence ends Israel-Gaza Truce” reports the recent escalation of violence between Gaza and Israel. Unusually, it’s recounted in chronological order, with the first paragraph reporting the rocket attacks on Israel, for once not headlining with Israel’s retaliation.  “Militants in Gaza have fired 11 rockets into Israel, officials say, amid a flare-up in fighting  which shattered a brief ceasefire between the two sides.”
We already know that despite the UK being amongst countries that consider them a terrorist organisation,  (The European Union, the United States, Canada, Israel and Japan classify Hamas as a terrorist organization) the BBC is bashful about using the T word in relation to Hamas, although Jane Corbin’s ‘Price Tag’ Panorama used the word quite happily to label a pack of teenaged Israeli settlers who daubed graffiti on Palestinian property.
Once more we find the arguably superfluous “officials say”. Did they fire the rockets or didn’t they?
Donnison’s ‘who-started-it’ narrative proceeds, back and forth, eventually concluding that ultimately the guilty party was Israel.  However, apart from another unnecessary “Israel says” the last paragraph redresses the balance.
“Hamas militants have been behind most of the recent rocket attacks,....” etcThe block-quoted soundbite passage in this article leads to another Donnison piece in which he explains the Israelis and the Palestinians are engaged in a never-ending tit for tat routine, and that both sides bear equal responsibility for breaking the numerous ceasefires.
It wasn’t Israel’s fault this time, he concedes, but he’s quick to assure us that it wasn’t Hamas’s fault either, rather “small extremist Salafi groups” in the face of whom Hamas are helpless.

This may or may not be the case, but why does the BBC attach “Israel says” to anything that could remotely be seen to justify Israel’s actions, inactions or intentions, while whatever a Palestinian spokesperson says or does, or what Jon Donnison imagines they say, do or think, is reported as fact.

Donnison hasn’t said: “ Hamas says it can’t stop it”. He states it.

“Hamas, which governs in Gaza, has sometimes tried to stop Salafis from firing but has not always been able to do so.”


“it is widely believed that Hamas does not want a major escalation in violence...” [...]“The movement is more interested in consolidating its power and strengthening the economy.”

Widely believed by whom? Says who? Is Donnison suggesting that Hamas *is* more interested in strengthening the economy than in eliminating Israel? Or is Hamas saying it?
So the “says” is absent in perhaps the one place where a “Hamas says” would actually be appropriate.

Like the kidnapee Alan Johnston, who was in Gaza to ‘tell their story” Donnison is telling us Hamas’s story.

“But when its own members are killed or Palestinian civilians are caught up in the violence, Hamas is under pressure to respond in order to assert its credentials as a resistance movement”  he pleads, “As the governing power in Gaza, it needs to be seen to protect the population.”

Then why, one may wonder, does it jeopardise the aforementioned population by provoking retaliation by Israel time and time again? Does Donnison believe Hamas really thinks that’s the best way of protecting the population?
“As such Hamas launched a barrage of rockets and mortars into Israel on Monday saying it was a response to the killing of one [sic] its men.” continues Donnison.  Why ‘as such’ ? Probably because without it, Hamas might look like terrorists.

P.S. The Telegraph is plugging a new book by Jeremy Bowen. No doubt he’ll be doing the rounds on the BBC. Few of the below-the-line comments are supportive of Bowen, or the BBC’s Middle East reporting in general. They say it’s biased!

As far as the Middle East is concerned, the answer to the question in the title of this blog is a resounding yes.